MENUMENU
The Birmingham 2022 Queen’s Baton Relay arrived in Sri Lanka this afternoon, reaching the 25th destination out of the 72 Commonwealth nations. President of Commonwealth Games Association (CGA) in Sri Lanka, Suresh Subramaniam, and other dignitaries from the Ministry of Sports and British High Commission officially welcomed the Baton at the Bandaranaike International Airport. 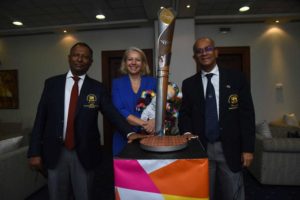 Jayawardena, in his new role, which is effective for a period of one year, will be in charge of the overall cricketing element of the national teams and will provide invaluable strategic support for the players and management teams at the High-Performance Center.

‘’We are extremely happy that Mahela is joining the National Team for an extended role, especially given the context that Sri Lanka has a heavy international calendar during the year 2022,’’ said Ashley De Silva, CEO of Sri Lanka Cricket.

“Mahela’s contributions during the first round of the ICC Men’s T20 World Cup became invaluable for the overall performances of our team in the concluded event,’ De Silva, further added.

Despite the new appointment, Jayawardena will continue to perform in his role with the Under-19 team, as it prepares for next year’s ICC under-19 World Cup to be held in West Indies.

“This is an exciting opportunity to work with the national cricketers and coaches in our various development squads, including the U19 and A Team teams, to help us do justice to the enormous cricketing talent and potential in Sri Lanka,” said Mahela Jayawardena.

The Queen’s Baton will be taken across 72 countries ahead of the 22nd Commonwealth Games that will begin in Birmingham, England on the 28th of July 2022.

The baton is scheduled to be brought to Sri Lanka on the 3rd of January 2022 with an event held at Independence Square in Colombo.

It will be taken across several parts of Sri Lanka including Kandy until the 6th of January 2022.

Suresh Subramaniam, President of the National Olympic Committee said, for individual events, they have decided to only select athletes who can win. He said there are some team sports in which they are unable to win medals despite gaining a qualification and they assume that they will be allowed to compete because they have qualified. The final decision will be taken on the 31st of January. Subramaniam noted that it’s unfortunate to the teams that are selected only a month before the event and he decided that this can’t continue, so the pools will be selected six months earlier, as well as athletes, will be drafted into the team from those pools. 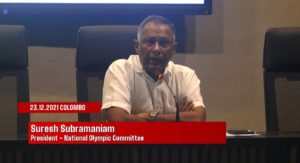 Sri Lanka won a gold medal at the Commonwealth Weightlifting Championship on Thursday (09).

Accordingly, Srimali Samarakoon won the gold medal in the women’s 45 kg weight class at the championship in Uzbekistan.

Sri Lankan weightlifter Thilanka Palangasinghe has secured a bronze medal at the Commonwealth Weightlifting Championships 2021 in Tashkent, Uzbekistan, on Friday.

The 28-year-old weightlifter competed in the men’s 61kg category.

The Commonwealth Championships, the most important qualifying event for the 2022 Commonwealth Games in Birmingham, was earlier scheduled to be held in Singapore in October but was moved to Uzbekistan due to Covid-19 issues.

A 20-member contingent of weightlifters was selected by the Sri Lanka Weightlifting Federation (SLWF) in preparation for the Commonwealth Championships and IWF World Championships.

The women athlete has brought much credit to the Navy as well as the motherland throughout her athletic career.

She joined Sri Lanka Navy in 2010 and has represented Sri Lanka Navy in athletics over the years. For her exceptional talents in the sporting arena, she has won the award for the Best Sportswoman from Commander of the Navy, Vice Admiral Nishantha Ulugetenne at the Navy Colours Night in 2021. She is coached by Mr. GL Sajith Jayalal, Director, National Institute of Sports Science.

11-year-old Tashiya Piyadasa, recently claimed the championship in the under-11 category at the National Junior Table Tennis Championships held in the USA, June. Her beatific talent in table tennis (TT) made her be graded at No. 4 in the under-13 category. In advance, she has also received a TT scholarship.

Tashiya is the elder daughter of a former top table tennis player in Sri Lanka, Thilina Piyadasa. Her father, Thilina was an eight-time national champion in Sri Lanka till 2007. In 1996, while in school, he was selected as the most talented table tennis player. Tashiya’s mother Rifka Kamil is also a table tennis player who captained the Sri Lanka table tennis team in 1997 and was commended as the most talented schoolgirl player at the Milo awards ceremony in 1996. It is discernible that Tashiya is bestowed and inherited her scintillating TT skills from her parents. The Piyadasa family is now settled down in the USA. Currently, Tashiya is the TT champion in the USA in the under-11 age group.

Her ingress into TT is gradual. Though she was not keen on TT at the beginning, when she was about seven, she decided on her own to take up table tennis. Her father was her first coach. Then Udaya RAnasignhe, a former Sri Lanka national TT champion, who had also settled down in the USA, volunteered to coach my daughter. Under his tutelage and mentorship, Tashiya trained hard, followed the coach’s instructions, and took part in several TT tournaments. Currently, Tashiya’s coach is an Olympic TT gold medalist in the USA. She is Shao June, a well-known coach and the president of the California Table Tennis club. Under her mentorship, Tashiya put in special effort to win the title at a national level tournament in the under-11 age group.

Let us wish Tashiya, the girl with Sri Lankan roots to be successful with her all future endeavors.

As soon as the players disembarked from the aircraft, they were taken to the PCR Testing Center at the Katunayake Airport.

Following the results of the tests, the Paralympic medalists were invited to a special guest lounge at the Katunayake Airport for a welcome ceremony. (Pix by T.K.G. Kapila)

He established his new world record, registering a throw of 67.79m, surpassing the previous world record (63.97 m) set by the Indian Javelin thrower Devendra Jhajharia in Rio Summer Paralympics 2016, who also had to settle for Silver in Tokyo Paralympic Games 2020.

Sergeant Dinesh has surmounted so many challenges to be on top of the world and bring glory to his mother country. He was affiliated with the Gajaba Regiment of the Sri Lankan army. He was subjected to injury in the war front against LTTE terrorists in the Kilinochchi area on 16 December 2008. It took around four years for him to recuperate himself. In his sports career, he has previously participated in Army Para Athletic Meet in 2012 winning gold (52 m), In Malaysia’s Para Athletic meet in 2012 winning gold (52.95 m), in Rio Summer.
A war veteran, the Javelin thrower, Corporal Dulan Kodithuwakku claimed bronze in the Men’s javelin throw – F64 event at the Tokyo Paralympics. It is a brilliant day for Sri Lanka, with another war hero being able to bag a medal for mother Sri Lanka.

Kodithuwakku registered his personal best registering a throw of 65.61 m. It was an Australian national Michal Burian secured the Silver (66.29 m) while India’s Sumit Antil secured the Gold medal with a world record throw of 68.55 m.

Kodithuwakku is a Corporal attached to the Military Police of the Sri Lankan Army. In his sports career he has previously participated in Asian Para Games 2018 held in Indonesia, World Para Games 2019 held in Dubai, and the National Para games.

Let us all shower our love to our heroes bringing glory to the country and making play our National Anthem in the airs of the Paralympic stadium for the second time in a day. Today will be a day, long remembered by all Sri Lankans for winning two Paralympic medals in one day for javelin throw.