MENUMENU
News ≫ Tourist arrivals picking up in Sri Lanka; 66-pct increase in June from May

Tourist arrivals picking up in Sri Lanka; 66-pct increase in June from May

Tourist arrivals to Sri Lanka increased by 66 percent in the month of June 2019 from the previous month, the latest data from the Tourism Ministry showed.

The total number of international tourist arrivals to Sri Lanka during June was 63,072, up from 37,802 reported in May just after the Easter Sunday Attacks.

However, tourist arrivals have declined during June 2019 against the same period last year. In comparison to June last year, there was a drop of 57 percent when the arrivals were 146,828. 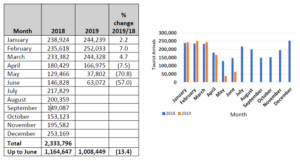 This month, the largest source market for tourists was India, followed by Australia, the United Kingdom, and China. Almost 97 percent of the tourists traveled by air to Sri Lanka.

As of 30 June 2019, 1,008,449 tourists have visited Sri Lanka for this year. It is a decline of 13.4 percent over the last year when 1,164,647 tourists visited the country during the same period. Source Travel Voice Photo Credits – Daily Mirror Sri Lanka