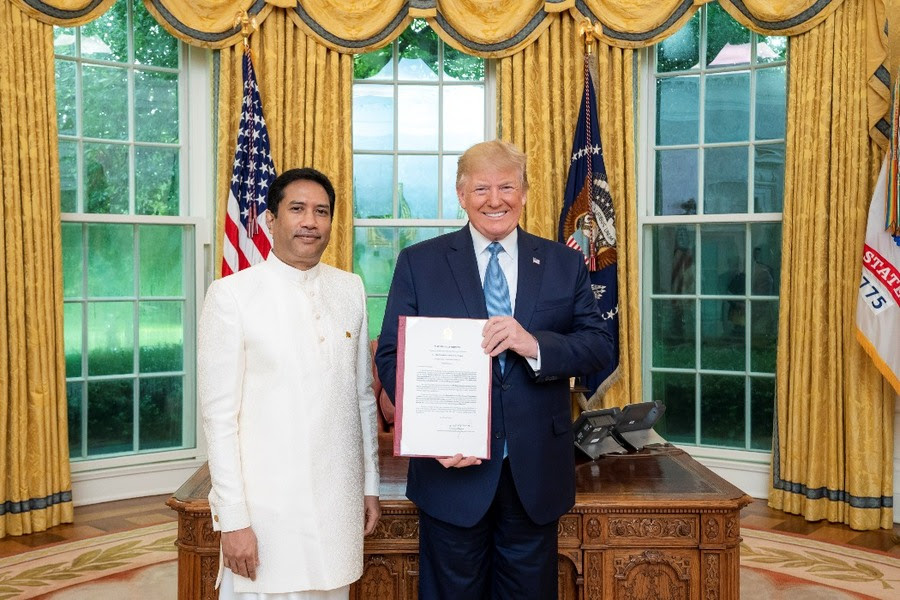 Ambassador of Sri Lanka to the United States, E. Rodney M. Perera, presented his credentials to the President of the United States of America, Donald J. Trump, at the Oval Office of the White House on 08 July 2019.

Ambassador Perera conveyed to President Trump the greetings and best wishes of the President, the Government and the people of Sri Lanka. He explained Sri Lanka’s continuing efforts to build relationships of confidence and trust, and to strengthen institutions essential for the sustainable progress of the multi-ethnic, multi-cultural, multi-lingual and multi-religious nation. He further stated that a robust multi-dimensional relationship with the United States remains an important objective for the Government and people of Sri Lanka which includes strengthening trade and economic ties, widening people-to-people contacts and promoting international and regional peace and security.

President Trump welcomed Ambassador Perera to Washington DC and reiterated his commitment that the US would stand with Sri Lanka in the aftermath of the Easter Sunday terror attacks and expand counterterrorism, maritime, and border security cooperation with the island nation. The US President also stressed the importance of working together to strengthen the ties between the two countries, which are rooted in a shared commitment to democracy, human rights, and the rule of law. He welcomed Sri Lanka’s commitments to promoting reconciliation, accountability, and justice in pursuit of lasting peace following the civil conflict.

Ambassador Perera presented to President Trump, who has been involved in construction projects as an entrepreneur, images of the Lovamahapaya and Jetavanaramaya, two monumental structures that speak volumes of Sri Lanka’s cultural, architectural and engineering heritage in the ancient world.

President Trump concluded that he looks forward to working with Ambassador Perera to advance the common bilateral agenda and deepen the bonds between the US and Sri Lanka.