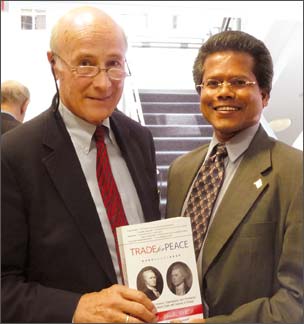 Like the famous French author Alex de Tocqueville, who wrote Democracy in America, Sri Lankan-born scholar and diplomat, Dr. Patrick Mendis has traced America’s penchant for commerce freemasonry and commerce in an insightful account of American roots. His book is titled “TRADE for PEACE: How the DNA of America, Freemasonry, and Providence Created a New World Order with Nobody in charge.”

Dr. Patrick Mendis presents a copy of his book, TRADE for PEACE, to his Professor Joseph Nye Jr., the former dean of the Harvard University’s Kennedy School of Government, at the Henry Kissinger Institute of the Woodrow Wilson Center for International Scholars in Washington, D.C.

He provides irrefutable proof of American founders, especially George Washington and Benjamin Franklin, delving into astrology and freemasonry and principles of commerce in designing the Capital-Washington D.C. and the nascent commercial republic of America. Dr. Mendis sees cultural connections those born in the U.S. often ignored.

Dr. Mendis found encoded in America’s DNA the ability to trade with an uncanny zeal. Trade for peace dominated that doctrine for most of the two and quarter centuries of American existence. He provides an interesting approach for analyzing the nation’s commercial roots.

Dr. Mendis demonstrates in his book that the beginning of Constitution Avenue is the Andrew Melon “Zodiac” Fountain adjacent to the U.S. Federal Trade Commission and it ends with the celestial statue of Albert Einstein near the State Department. He believes that the new U.S. Institute of Peace at the end of Constitution Avenue would be the major landmark of America’s founding vision: TRADE for PEACE.

While growing up in Sri Lanka with Buddhist monks and Catholic priests, Dr. Mendis has evidently mastered the basics of astrological science and early Christian esoteric knowledge which prompted deeper probe of the American psyche. Most recently, he studied the ‘secret’ knowledge of Freemasonry that had clearly influenced America’s founders. After receiving the Benjamin Franklin Award from the State Department, he learned more about Franklin, America’s famous astrologer and the first diplomat.

The 624-page tome that combined history, politics, economics, architecture, esoteric knowledge, foreign policy strategies and global trade relations proves a rare foray into American discourse on a variety of matters. The thesis that America’s founding mission has always been to promote trade to integrate the global community for peaceful living and unity as it was the case for the original 13 colonies in the Union comes out as a challenge ever present even after 230 years of the Republic.

A combination of interstate commerce (not the religion) and freedom as depicted in the Constitution has paradoxically bound and expanded the United States together as one nation. Dr. Mendis argues that the World Trade Organization (WTO) is the final frontier of the American Experiment in order to bind the community of nations together.

Dr. Mendis grew up in Ja-ela and the suburbs of Polonnaruwa and had a full immersion into the ethos of Sri Lankan cultural heritage. He brings that insight into the making of America in his book. With a lineage to the stratifying details of American foreign policy acquired by being associated with the prestigious Hubert H. Humphrey Institute of Public Affairs at the University of Minnesota, Dr. Mendis took wings working as a student UN ambassador, seasoned diplomat and research scholar. He was one of the three recipients of the first Humphrey Leadership Award in 1986 along with Ambassador Max Kampelman and former Vice President Walter Mondale.

In 1985, Dr. Mendis worked as Sri Lanka’s “Youth Ambassador” at the United Nations in New York. Later, he was often consulted on international matters by the State Department and Senate Foreign Relations Committee during the tenure of Secretaries Madeleine Albright and Colin Powell.

In the foreword to his book, Professor Brian Atwood, former USAID administrator under President Bill Clinton, writes, “This highly readable synthesis, whose main theme derives from the Constitution’s preface, pleads for a rethinking of the American role in global leadership.” Both Professor Atwood (current dean of the Humphrey Institute) and Dr. Mendis are former AFS exchange students.

Dr. Mendis would perhaps compete for the title of the most sought after scholar on America’s national profile. His interest would lead him towards greater research studies. Professor Mendis currently serves as the vice president of the Osgood Center for International Studies and a visiting scholar in foreign policy at the Johns Hopkins University’s Nitze School of Advanced International Studies (SAIS) in Washington, D.C. An adjunct professor of international diplomacy at Norwich University, Dr. Mendis is a fellow of the World Academy of Art and Science and a life member of the Society for International Development.