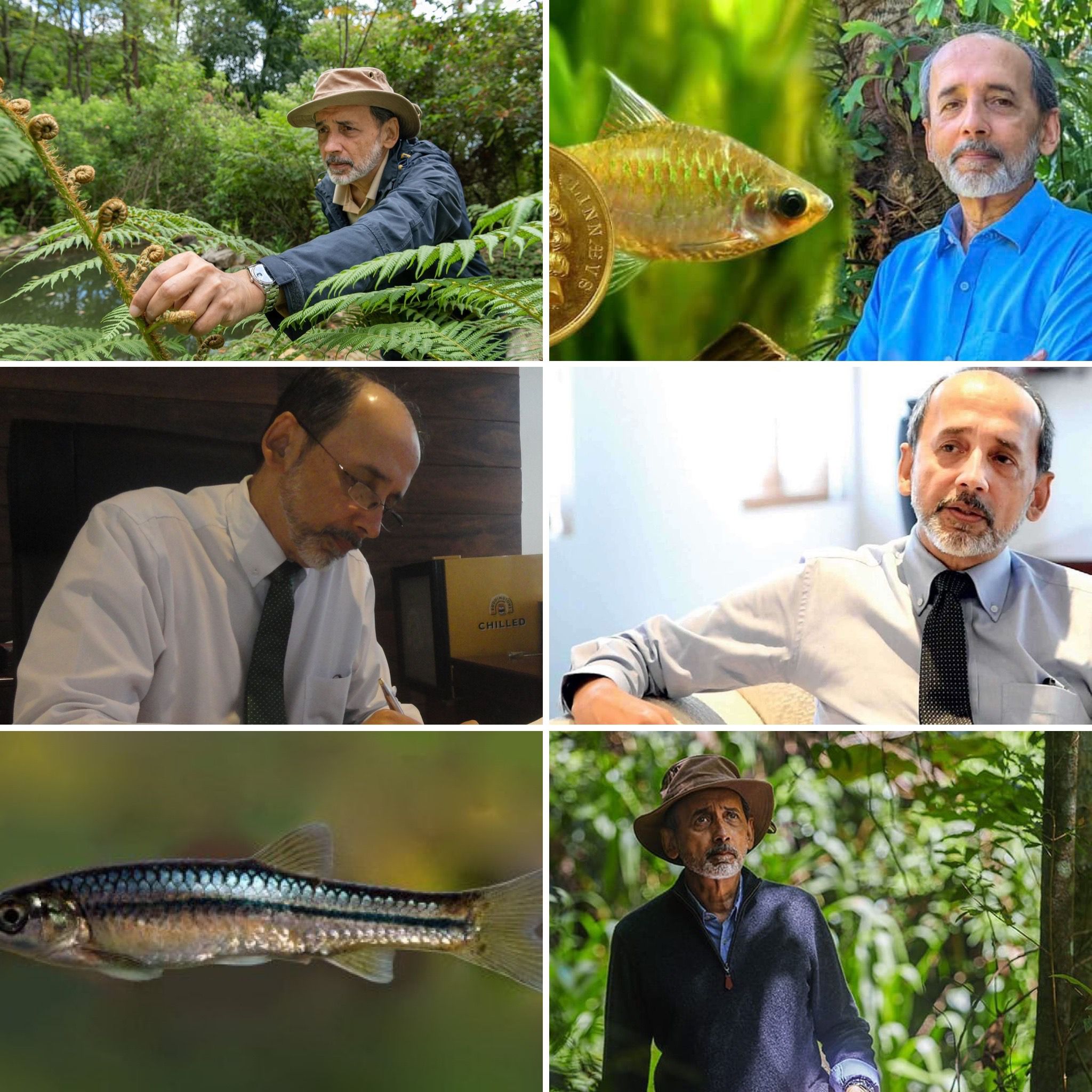 *Today the Linnean Medal was awarded at a London ceremony to the first Sri Lankan in its history: since 1888, the medal has been given annually to a botanist or a zoologist, or to one of each, in the same year.

*The list of winning scientists–from Alfred Wallace to Stephen Jay Gould–is long, yet the 2022 honoree in the zoology section is not a scientist in the formal sense, but rather a Sri Lankan author, educator and taxonomist, Rohan Pethiyagoda, who formerly served as deputy chair of the IUCN’s Species Survival Commission.

*“His impact on biodiversity research in Sri Lanka and beyond through his output and catalytic influence cannot be overestimated,” the award committee wrote, and the author of this commentary explains why this is so. This article is a commentary. The views expressed are those of the author, not necessarily Mongabay.

Looking at the roll call of Linnean Medal winners is to witness the history of natural history, taxonomy, and nature conservation since Darwin.

The medal is tangential to the orbit of the Nobel Prize – more international and human-centric with few famous naturalists (excluding those in the Peace Prize category) and those mostly from 1973, when there was a simultaneous hat-trick with Niko Tinbergen, Karl von Frisch and Konrad Lorenz. They won that Nobel, somewhat incongruously, for Medicine, and this was a recognition that understanding nature can contribute to human welfare, too. But in a way, the Linnean Medal may be seen as the Nobel Prize for naturalists.

The prize of the Linnean Medal is populated with biodiversity titans like Richard Owen (who coined “dinosaurs”), Alfred Wallace, Darwin’s defenders Joseph Hooker and Thomas Huxley, and from the continent Alphonse de Candolle, one of the fathers of botany. There are also characters who remain historically unforgettable to biologists: Albert Günther, Ernst Haeckel, Willi Hennig, Stephen Jay Gould, Ernst Mayr, Alfred Romer, William Stearn, G. Ledyard Stebbins, D’Arcy Thompson and many more that others would recognize – plus Derek Yalden, one of my beloved tutors.

The medal was never conceived as an international award but has reflected the reach of the fellowship of the Linnean Society, rooted in naming things, global exploration, evolution, earth history and taxonomy. More than any other similar award available elsewhere, notably from the U.S., it is distinguished by a historical pedigree and the names celebrated. Not just of medal holders, their travels, ideas and arguments, but also named plants, animals and the groupings assigned to them.

Association with the Linnean Society has never been a requirement to win the prize, but, as with all medals, nominations have arisen in connection with the society itself, thanks to the discoveries and influences provided by the prevailing naturalist community.

In 2022, the Zoological Medal of the Linnean Society has gone to Rohan Pethiyagoda from Sri Lanka, representing a first for the island, possibly being only the second prize-winner from Asia. In the past both Sri Lanka and Asia have come under the ambit of the Linnean Medal and biodiversity exploration. Alfred Russell Wallace was most associated with the Malay Archipelago, Joseph Hooker was strongly linked with the Himalayas and Ernst Haeckel spent time in Sri Lanka, among related geographical journeying.

How has Pethiyagoda qualified from an Asian sphere after over a century, given that a great deal of the focus of 20th century Linnean Medal winning seemed more concerned with academic evolutionary and taxonomic science rather than the naming of things that seems to belong to an earlier age? As a mere Fellow of the Linnean Society, people like me have no say over who gets awards, but one can nominate candidates.

Amongst his copious outputs, Pethiyagoda has contributed greatly in highlighting the very history of biodiversity in Asia, linking together scientists, artists, travelers and explorers in both East and West. Starting from around the 17th century, he has catalogued and brought to the fore a celebration of foreign engagement, predominantly from the West, that reveled in the biodiversity of South Asia and Southeast Asia. His publishing house Wildlife Heritage Trust (WHT) has produced biographies and memoirs of notable naturalists from the region. To celebrate the 300th anniversary of Linnaeus, Pethiyagoda authored Pearls, Spices and Green Gold, a WHT book that celebrates many notable contributors to the wildlife of Sri Lanka and South Asia, including among many now, the not widely known Ernst Haeckel.

Pethiyagoda’s prodigious taxonomic output centered on Sri Lanka but also Singapore, parts of South and Southeast Asia involving collaboration and research with friends and institutes in the U.K., U.S. and Australia. Dawkinsia, a genus of fish whose name he conceived honors the British evolutionist Richard Dawkins – these attractive fish have also benefited from the limelight and are now popular with aquarists.

Richard Dawkins is not the only scientist so honored, others include malacologist Fred Naggs. South and Southeast Asia are now recognized as hotspots of amphibian diversity thanks to this work with the introduction of hundreds of new frogs, dozens of new fish and reptiles in work that continues to evolve. One of Pethiyagoda’s first books, a comprehensive color guide to the freshwater fish of Sri Lanka was a bestseller and started something big. To paraphrase Mark Twain for the umpteenth time, the death of alpha taxonomy has been greatly exaggerated.

Meanwhile, the Convention on Biological Diversity (CBD), ratified in the 1990s has been of questionable benefit to wildlife research and alpha-taxonomy, particularly in the global South. It started with fears about private patents on genes and gene technology and has ended up in misplaced hype around “biopiracy.” Pethiyagoda has helped the scientific community to appreciate just how much damage the CBD may have caused to taxonomy and industry such as the pharmaceutical sector – both in Sri Lanka and many other countries with overzealous interpretations of its provisions, that seem to dubiously accord wildlife ownership within sovereign nationalistic governance – so-called bionationalism.

“My beef with the biopiracy argument is not that biopiracy cannot happen, it is entirely conceivable that someone will look in a rainforest somewhere and find a gene of huge commercial value, that is conceivable. But in order to prevent that guy from finding that gene, we have shut down all of biological research in Sri Lanka… you have to get a permit to do any kind of biological research in this country. And there is a huge problem because they believe that people are out to pirate biological resources, as a result of that, to get a permit is near impossible and I’m going to return to this subject. The biopiracy hysteria set up by the environmental lobby has caused huge harm to research we need for biodiversity conservation.”

Whereas there are tensions and dangers between foreigners taking commercial or scientific bragging rights from wildlife in poorer or under-resourced localities, Pethiyagoda has highlighted the best advantages of a shared approach to the exploration of nature by locals and foreigners – that would hopefully bring in much needed research and conservation revenue to poorer parts of the world, and lead to a wider appreciation of wildlife. When we declare, as Pethiyagoda has helped to emphasize, the hotspot status of parts of South Asia, then, at some level, the wildlife treasures of the region can also belong to the whole world. This is in the same way that the Mona Lisa is famous worldwide while residing in Paris. Why otherwise should the Sinharaja forest be declared a Man and Biosphere (MAB) reserve of international importance?

In this skein, once more through his publications, and now films and podcasts, Pethiyagoda has, and is, helping to create and foster local and international expertise centered on the regions he is most interested in. Many are the scientists who Pethiyagoda has mentored, championed or represented through WHT and scientific output – Madhava Meegaskumbura, Kelum Manamendra-Arachchi and Mohammed Bahir from Sri Lanka but also Wolfgang L. Werner, A. J. G. H. Kostermans or Mark S. Ashton, leaders in their field from further away. Such collaborations and an international interchange of specimens, publications, ideas and funds will be pivotal to ensure the survival and cherishing of biodiversity both in Sri Lanka and further afield.

Unfortunately, politics, economics, legalities and poor attitudes – not least borne of ignorance and failure in international diplomacy – has stymied many of Pethiyagoda’s ambitions for the island, such as a Biodiversity Institute or a greater sharing of expertise and funds, if not specimens. Many things now look a lot bleaker since vast areas of forest were felled in Sri Lanka to make way for a plantation economy – something that Pethiyagoda, as former head of the Board of Tea would also have familiarity with. What the Linnean Medal will help highlight is Rohan’s contributions for us to at least appreciate the historical legacy of commerce and enterprise alongside a wealth of biodiversity in searches for future solutions. As he has publicly stated:

“Most environmentalists in Sri Lanka just talk; it’s a talk shop. That’s what I’m doing here today, but I think to be fair I do some work, too. But most of us just articulate opinions not based on science, not based on fact and it has done us a huge disservice. And that, I think, is the core problem that we need to address to get environmentalism in Sri Lanka back on track doing good work, fostering and protecting the environment, recovering species that are threatened with extinction, restoring landscapes that have been degraded; putting our country back on a decent track.”

Pethiyagoda was awarded the Linnean Medal simply because he deserves it. His body of work and legacy with regard to the natural world is greater than that of many others combined, and will be of assistance to both locals and the international community to cherish their own biodiversities and associated histories. This was accomplished in spite of the fact that he was, or still is, largely an amateur, a naturalist in the old sense of the word, from a time before the first half of the twentieth century. He has never really been a salaried scientist throughout his rich career so far, and has declined honorary doctorates proffered in his direction – maybe because putting wildlife on the map was more important.

And the future beckons more discoveries that may yet cause ripples. His latest work, The Ecology and Biogeography of Sri Lanka, written alongside H. Sudhasinghe, is a first in-depth study of the faunal history of South Asia, from a fishy perspective, among other biotas.

The legacy and inspirations from his work will be influential in the years to come, despite grave doubts about the fate of Sri Lanka’s own biodiversity heritage.

Rajith Dissanayake co-nominated Rohan Pethiyagoda for the Linnean Medal with a team of two others. He earned a PhD studying Funambulus palm squirrels and works at Birkbeck College/University of London.

For more information go to: http://www.mongabay.com