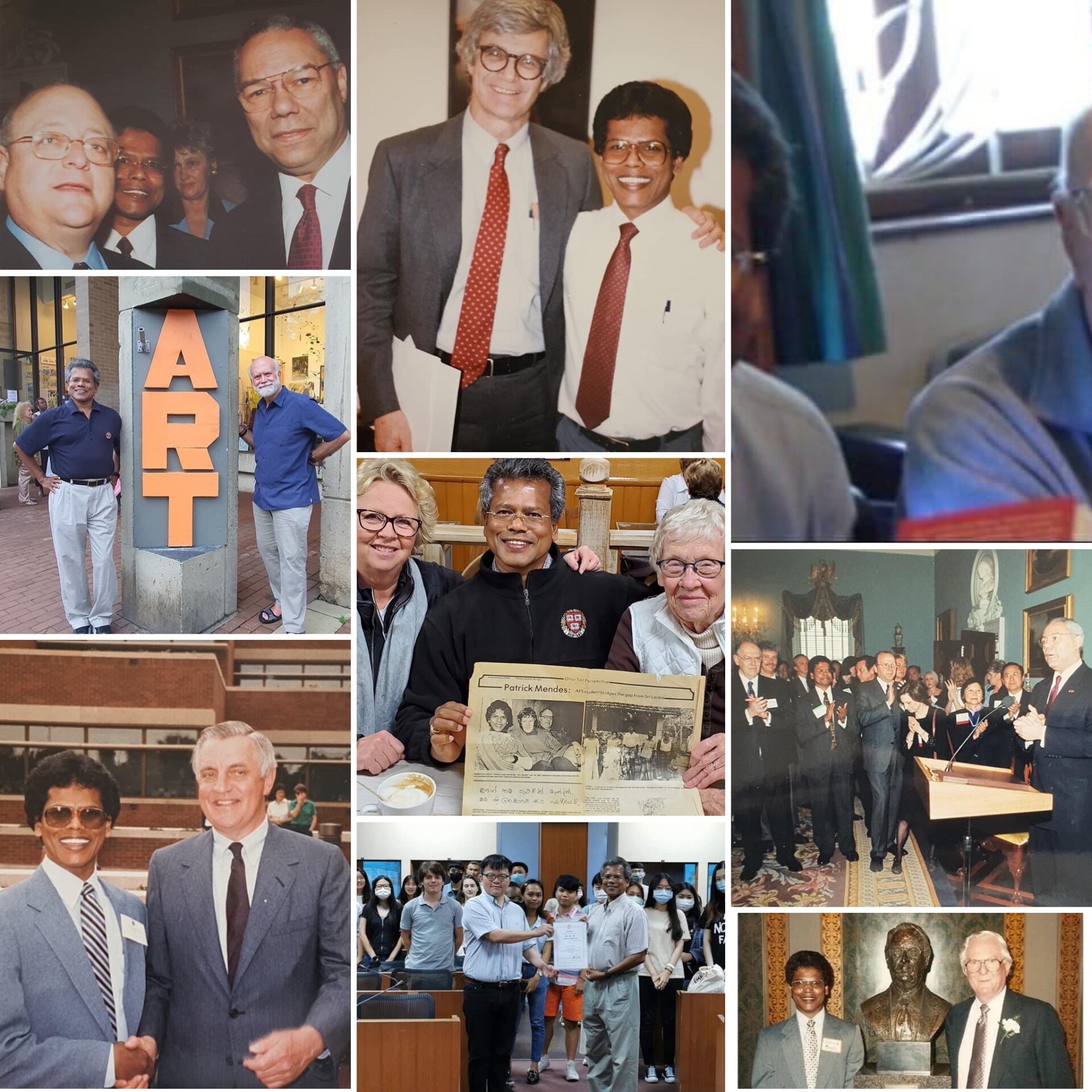 Dr. Patrick Mendis was born in the medieval capital of Polonnaruwa in 1960. Since he was a six-month old child, he was raised by his paternal grandparents and grew up with Catholic priests and Buddhist monks in a rice-growing rural village while attending the Palugasdamana Maha Vidyalaya. He was a Boy Scout, a Police Cadets sergeant, and the best commander of the Army Cadets Corps of Sri Lanka. In 1976, he received the UNESCO Award in an island-wide high school public speaking competition sponsored by the United Nations Association of Sri Lanka.

At the age of 18, he won the AFS scholarship to attend an American high school in Perham, Minnesota. At the end of his stay in the United States in 1979, Mendis traveled to Washington, DC, where he met with US Vice President Walter Mondale and US Senator Rudy Boschwitz. Both Mondale and Boschwitz represented the State of Minnesota; they later became the friends and supporters of Mendis.

After receiving his American diploma from Minnesota, Mendis returned to the University of Sri Jayewardenepura, the premier institution for management studies and commerce in Sri Lanka, where he later endowed two annual scholarships in leadership and management studies in 1993. Mendis served as the vice president of the World University Service, the president of the University Sports Council, and a member of the University of Sri Jayewardenepura’s badminton, athletic, and swimming teams for which he won numerous awards and honors.

Return to the United States

Having earned his BSc in business administration and economics (First Class Honors) from the University of Sri Jayewardenepura in 1983, Mendis returned to the United States for graduate studies on a Humphrey fellowship at the University of Minnesota’s Hubert H. Humphrey School of Public Affairs. When the civil war started in Sri Lanka, he was “adopted” by his AFS family and friends in Minnesota. In memory of his late AFS family, he established the Johnson-Mendis Scholarship annually given to a Perham high school student attending the Minnesota State Community and Technical College at Fergus Falls.

After the United Nations, Mendis also worked at the World Bank and served as a consultant to the US Department of State in Washington, DC.

At the University of Minnesota, Mendis studied under the late NATO Ambassador Harlan Cleveland, the founding dean of the Humphrey School. He obtained his MA in international development and foreign affairs from the Humphrey School in 1986. At the graduation ceremony, Mendis received the first Hubert H. Humphrey Alumni Award for Outstanding Leadership. Other three Humphrey Leadership Award recipients were US Vice President Walter Mondale, US Ambassador Max Kampelman, and UNEP Executive Director Mustafa Tolba.

Prior to attending the Humphrey School of Public Affairs, Mendis worked at the Minnesota House of Representatives under the late Honorable Edward Burdick, the chief clerk and parliamentarian. In 1984, Minnesota Governor Rudy Perpich bestowed Mendis an Honorary Citizenship of Minnesota for his contributions. In honor and memory of his friend and “adopted” American father, Mendis established the annual Edward Burdick Legislative Award at the University of Minnesota.

After his PhD in geography and applied economics at the University of Minnesota in 1989, Mendis served as a lecturer in international relations and a visiting scholar in applied economics at the University of Minnesota from 1990 to 1997. He also served as the president of the Society for International Development – Minnesota Chapter, the vice president of the United Nations Association of the United States – Minnesota Division, the founding chair of the Saint Paul Foundation’s Asian-Pacific Endowment for Community Development. To recognize his leadership, he is listed in Who’s Who of Asian-Americans.

Mendis also served on the staff of the US Senate Foreign Relations Committee under Senator Rudy Boschwitz (R-MN), the chair of the Senate Foreign Relations Sub-Committee on Middle East and South Asian Affairs. For his government service and volunteer activities, Mendis received the Governor Harold Stassen Award for United Nations Affairs, the State of Minnesota’s Asian-Pacific Heritage Award, and the University of Minnesota President’s Leadership and Service Award. He is listed in Who’s Who in American Colleges and Universities. Mendis was later honored with the Alumnus of Notable Achievement Award at the University of Minnesota’s College of Liberal Arts.

While teaching at the University of Minnesota, Mendis received the John F. Kennedy scholarship to attend the Harvard Kennedy School of Government and its Executive Leadership Program for mid-career professionals. He later served as a Rajawali senior fellow of the Kennedy School’s Ash Center for Democratic Governance and Innovation as well as an associate-in-research at the Fairbank Center for Chinese Studies at Harvard. Mendis established the Millennials Award for Outstanding Leadership and Service for international relations and journalism students at Harvard University.

When the tragic tsunami devasted Sri Lanka in 2004, Mendis raised funds for a number of tsunami projects for Sarvodaya and other Sri Lankan organizations in working with the Embassy of Sri Lanka and the Harvard University Club of Washington, DC. He has established a range of tsunami scholarships, a micro-loan program, and the Sarvodaya Peace Prize in Sri Lanka in collaboration with the Calvert Foundation in Maryland. Mendis is a founding chairman of the board of advisors at the Educate Lanka Foundation in the United States. He continues to support a number of micro-loans and small business projects in more than 40 countries in Africa, Asia, and the Americas.

After leaving Minnesota in 1997, Mendis served as a military professor in the NATO and Pacific Commands of the US Department of Defense, teaching in every major military base in England, Germany, Italy, Japan, South Korea, Spain, and Turkey.

Returning from the overseas assignments, Mendis worked as the chairman of the US Interagency Policy Working Group in the Bureau of Oceans and International Environmental and Scientific Affairs under the late Secretary of State Madeleine Albright, the secretariat director of the Bureau of Educational and Cultural Affairs under the late Secretary of State Colin Powell, and a US Commissioner to the UNESCO in the Bureau of International Organization Affairs under Secretaries of State Hilary Clinton and John Kerry until the Trump White House withdrew from the UN agency. For his diplomatic service and leadership, he was recognized with the Meritorious Honor Award, the UN Negotiation Award, and the Benjamin Franklin Award by the US Department of State. Mendis also worked in the US Departments of Agriculture and Energy. For his service, he received the USDA Outstanding Award for Leadership.

Before the US government service, Mendis led the University of Minnesota team selected to teach market economics and management to a group of former government officials and young Russian entrepreneurs at the Leningrad State University. This took place during the historic 1991 summer in the former Soviet Union. While there, Mendis addressed the Soviet Committee on Ecology and lectured at the Moscow State University.

Through the University of Maryland’s faculty exchange program, Mendis travelled to China to teach courses on American government and culture to Chinese students at the Northwestern Polytechnic University in Xi’an. After the government service, he returned to China many times to teach at over 25 Chinese universities and academies, including the National Academy of Social Sciences as well as the Anhui, Guangzhou, Nanjing, Peking, Shandong, Tongji, and Tsinghua Universities.

He also served as a visiting professor of economics and public policy at the University of Pittsburgh’s Semester at Sea program, traveling to the Caribbean, Latin America, Africa and Asia. He later authored a book based on his first-hand observations of globalization and Americanization: “Glocalization: The Human Side of Globalization as If the Washington Consensus Mattered.” The foreword to the book was written by the late Sir Arthur C. Clarke; the Afterword was penned by Sarvodaya Founder Dr. A. T. Ariyaratne.

Mendis is the author of over 200 books, journal articles, newspaper columns, and research papers. He has worked in, and travelled to, more than 125 countries. He is cited as one of the 13 world famous people born in Sri Lanka. Mendis is listed in Who’s Who in America as well as Who’s Who in the World.

Click on the link below to learn more about Prof. Patrick Mendis: