The Government will begin development work on the country’s third international airport in Palaly this week, with an investment of Rs.19.5 billion, to operate regional commercial flights.

The official inauguration ceremony will be held on Friday 5 July under the patronage of Transport and Civil Aviation Minister Arjuna Ranatunga at the Palaly Airport in Kankesanthurai.

A Cabinet proposal presented by Prime Minister Ranil Wickremesinghe in his capacity as the Minister of National Policies, Economic Affairs, Resettlements and Rehabilitation, Northern Province Development, Vocational Training and Skills Development and Youth Affairs received approval for the project at the 29 January Cabinet meeting.

Once completed, the strategically located Palaly airport will have the capacity to handle direct commercial flights to countries like India, Australia, China, Japan, Middle East nations, and several European countries. 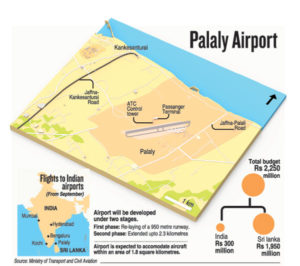 Development of the Northern Province was underscored as a top priority for the Government’s development agenda, and the Government believes an international airport in the peninsula would boost the region’s economy significantly.

The airport will be developed in two stages: expansions of the runway and related facilities will be completed during the first phase, while permanent terminal buildings will be constructed during the second phase, once the airport attracts a significant amount of air traffic.

The extent of the Palaly runway will be expanded to 3,500 meters, and it will have the capability to handle large passenger aircraft such as the Airbus A320 and A321.

Located approximately 16 km north of Jaffna, Palaly is a Sri Lanka Air Force base and a domestic airport. The airport was built by the British Royal Air Force during the WWII. After independence, Palaly Airport was used as the second international airport of the country, to operate flights to South India.