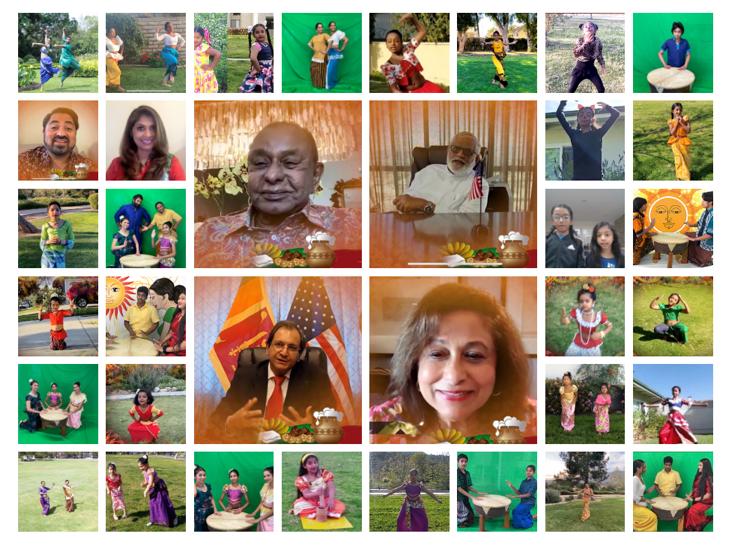 With the dawn of April month, we all are in the festive mood to celebrate one of the significant festivals in Sri Lanka; the Sinhala and Tamil New year. Annually, at SLF Academy of Performing Arts we; educate our students with rich traditions, customs, and rituals intertwined with our Sri Lankan culture and thereby promote togetherness. However, students of our academy, could not take part in the ‘Avurudu’ program and celebration in their usual countenance due to the prevailing pandemic situation.

Yet, we premiered our virtual ‘Avurudu’ event on 14th April fabulously. This even bridged the Sri Lankan community in LA as well as the Sri Lankans in our home country miles away. The event reached its uttermost success due to the great efforts taken by the instructors and the brilliant participation of the students, and the enthusiasm grown in the hearts of the students of our academy for the celebration of the new year.

We initiated our program with the new year greetings from the founder of the Sri Lanka Foundation, Dr. Walter Jayasinha, the ambassador of SL for the USA,H.E Ravinatha Ariyasinha, the Consul General for LA Dr. Lalith Chandrasa and the president of SLF; Dr. Dishan Jayasinha, the Director of Operations of the academy: Achala Weerasinghe. The program was ended with a thank you note from the Vice President of the SLF; Aeshea Jayasinghe.

The program epitomized the beauty of the new year under different items showcased by the students as well as the instructors, Nirosha Wijegunasekare, Akila Palipana, Nalinda Dilupama, Lal Thilakarathna, Umendra Kahandawaarachchi and Kanishka Gomas.

Students of PreK dance class – SLF Academy of performing Arts brilliantly performed for the song ‘Erabadu Mal pipila’ to show how nature beautifully gets dressed to celebrate the new year, the cry of the cuckoos and the ‘Erabadu’ trees draped in the crimson flowers.

Another vibrant item was showcased by our students mingling the sounds we hear during the ‘Avurudu’ season by compiling the folk singing and playing ‘Raban padha’. The items such as ‘Eluwan kaama’ and the dances showcased with the collaboration of the students of our academy from, the child, and intermediate classes, beginner and senior class, and the senior classes interpret the unity, togetherness and the strong bond shared between the students of our academy as much as the talent resided in them. The playing of the ‘Getabera’ and ‘Daula’ and the ‘Avurudu’ dance showcased by the instructors was heart-throbbing.

The program was organized amidst so many difficulties such as in the preparation of the costumes, rehearsals conducted virtually, and many more. Thus, special gratitude should be paid to all our students who took part in the items, the instructors who guided them, and to all others who played different roles in making the event successful.

Please click on the link below to watch the video: