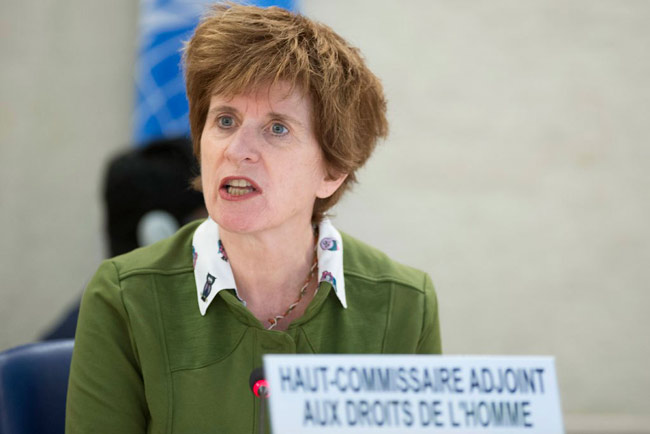 The United Nations says that Sri Lanka has shown slow progress in establishing transitional justice mechanisms, insufficient progress in returning land occupied by the military and that authorities have yet to demonstrate with the willingness or the capacity to address impunity for gross violations of human rights. UN Deputy High Commissioner for Human Rights, Ms. Kate Gilmore, addressing the 37th session of the Human Rights Council in Geneva, gave a written update on progress in promoting reconciliation, accountability and human rights in Sri Lanka (A/HRC/37/23) between March 2017 and January 2018.

She welcomed the Government’s constructive engagement with OHCHR and the human rights mechanisms, including its cooperation with visits of this Council’s Special Rapporteurs on human rights and terrorism; on truth, justice, reparation and guarantees of non-recurrence; and the Working Group on Arbitrary Detention. The Office of the High Commissioner for Human Rights (OHCHR) also welcomed Sri Lanka’s accession to the Optional Protocol to the Convention against Torture and the adoption of the National Human Rights Action Plan.“Yet, it is with much regret that we must report slow progress in establishing transitional justice mechanisms,” she said.

In the absence of concrete results or publicly available drafts of legislation, it seems doubtful that the transitional justice agenda committed to by the Government under this Council’s resolution 30/1 could be fully implemented before our next report in March 2019, the Deputy High Commissioner said. “We further regret that the commissioners of the Office of Missing Persons were only recently appointed, 20 months after the adoption of the legislation.”

In addition, there has been insufficient progress in returning land occupied by the military. Trust will not be rebuilt if land grabbing continues, nor without independent mechanisms established to determine fair compensations for land reserved for security reasons, she stressed. “Furthermore, the Authorities have yet to demonstrate with the willingness or the capacity to address impunity for gross violations of international human rights and international humanitarian law.” She stated that this strengthens the argument for the establishment of a specialized court to deal with serious crimes, supported by international practitioners. “In the absence of such a mechanism, we call on Member States to exercise universal jurisdiction.”

She said they are also seriously concerned about multiple incidents of inter-communal violence, attacks and hate speech against minorities observed last year – a worry further exacerbated by recent developments that have occurred since the drafting of the report, including violence against Muslims in Kandy district that led to the proclamation of state of emergency for 12 days.

“Allegations of continuing use of torture and continued reports of harassment or surveillance of human rights defenders are more than worrying.” “In light of the gravity of the above matters and given the import role that this Council has played to date, the High Commissioner strongly advises that this Council continue to focus its attention on the human rights of the people of Sri Lanka and in particular on the processes in place for accountability and reconciliation.”