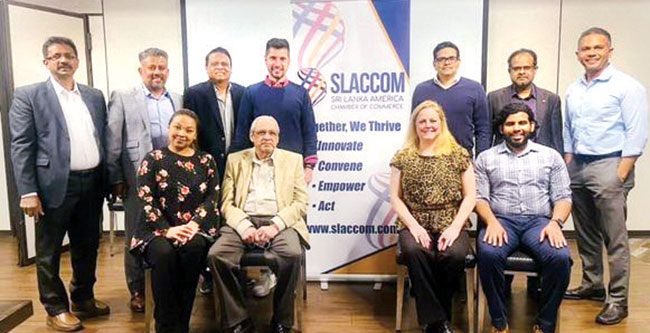 Two Washington-based senior officials of the South & Central Asia Division of the Commercial Law Development Programme (CLDP) of the U.S. Department of Commerce recently met with the Board of Directors of the Sri Lanka America Chamber of Commerce (SLACCOM) in its national headquarters in Las Vegas, Nevada to ascertain the feasibility of establishing a better flexibility for trade, commerce and investment between the two countries.

Led by SLACCOM president Sanje Sedera and his deputy Aruna Abayakoon with the participation of Charitha Yattogoda, Commercial Minister of the Sri Lankan Embassy in Washington and Anil Sirimanna, Minister Counselor of the Los Angeles-based SL Consulate General office, the four-hour discourse highlighted the vitality of twinning Colombo Port City with the global convention capital – the City of Las Vegas – promoting American and visiting foreign convention entrepreneurs to establish trade, commerce and investment with Sri Lanka using a twinning of the cities, attracting Colombo Port City to American and foreign entrepreneurs while engaged in improving the legal environment for such engagements, and probing avenues for small and medium Sri Lankan businesspersons to have an enhanced American market.

It was noted at this discourse between American and Chamber officials that the U.S. is Sri Lanka’s largest export market which accounts US$3 billion (in 2018) out of her total $11.7 billion exports and yet it was noted that there was a decrease of 6.4 percent from the 2017 export volume, and the importance of exploring avenues to enhance the volume of exports while engaged in improving legal environment to foster greater economic opportunity for both Sri Lankan entrepreneurs and US companies.

The Commercial Law Development Programme officials of the US Department of Commerce expressed their desire and interest in working with the SLACCOM to improve conducive legal environment for doing business between the United States and Sri Lanka, highlighting that such efforts undoubtedly foster greater political stability in Sri Lanka and economic opportunity for both nations.

The CLDP is tasked to improve the legal environment for business worldwide, as mentioned by Zmarak Khan, senior counsel for South and Central Asia of the Program in the US Commerce Department, and aimed at achieving US foreign policy goals in developing and post-conflict countries such as Sri Lanka through commercial legal reforms. Ms. Jocelyn A. Steiner, Attorney Advisor (international) said the Commercial Law Development Program unique government-to-government technical assistance draws upon highly experienced regulators, policymakers and business leaders to make meaningful and lasting changes to legal and judicial environment of the host country.

Three directors of the SLACCOM, deputy president Aruna Abayakoon, Douglas Perera and Lalindra Wickremaratne, apprised the two visiting Commerce Department officials their tour and discussions at the Colombo Port City last December, the engagement their Chamber envisages to promote trade, commerce and investment between the two countries, and their discussions with officials of Sri Lanka’s Board of Investment in Colombo including its head Raja Edirisuriya.

Khan pledged that he will have a dialogue with the Economic-Commercial Counselor of the American Embassy in Sri Lanka what steps and measures need to be taken to facilitate American entrepreneurs to engage in the Colombo Port City. Twinning both the City of Las Vegas and Colombo Port City, as explained by Chamber president Sanje Sedera, Khan said was a progressive thought as throughout the year Las Vegas has become a destination for trade shows and conventions bringing investors and entrepreneurs from worldwide.

The Chamber’s task is to establish rapport with these visiting economic giants, as engaged already, to ascertain what kind of investments possible in Sri Lanka while using the already established contacts in Sri Lanka to help and promote medium and small exporters to find markets in the United States, the Chamber directors informed the two Commerce Department officials. The CLDP comes in to make meaningful and lasting changes to legal and judicial environment in Sri Lanka with official dialogue with the government, it was noted at the discourse. The Chamber is exploring what incentives need to attract medium and large exporters to hold trade shows and conventions in Las Vegas which could expose them to international visiting entrepreneurs.

For more information go to: http://www.island.lk