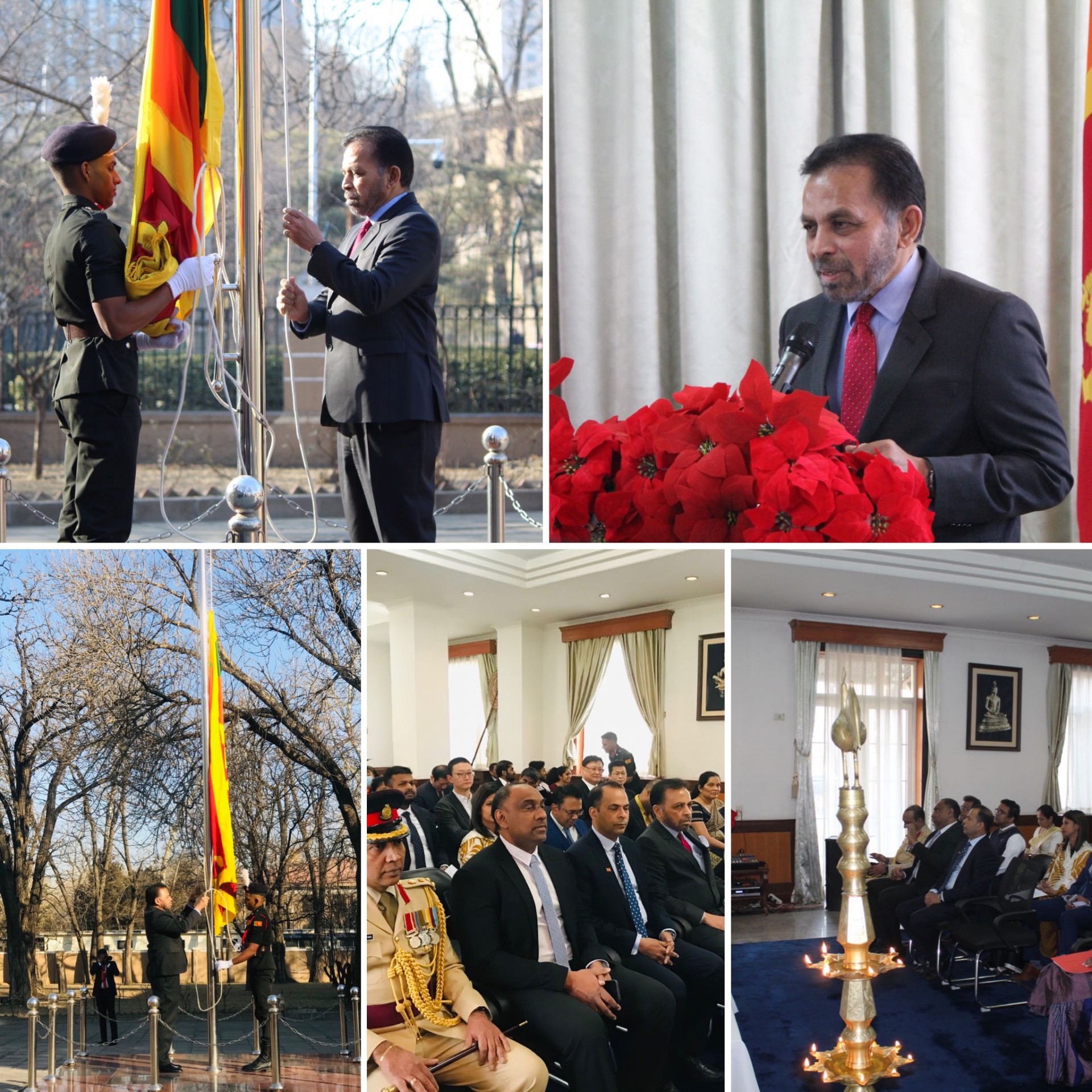 The 73rd Anniversary of Independence of Sri Lanka was celebrated at the Embassy of Sri Lanka in Beijing, with the participation of the Embassy staff, their family members and the Sri Lanka community. The event was held on a limited scale due to the prevailing pandemic related restrictions.

The programme commenced with the hoisting of the National Flag by Ambassador, Dr. Palitha Kohona, followed by the singing of the National Anthem. Subsequently, two minutes silence was observed in remembrance of Sri Lanka’s heroes who scarified their lives for the country’s independence, sovereignty and territorial integrity.

The traditional oil lamp was lit by the Ambassador, Embassy staff and the Sri Lanka community members. This was followed by religious observances conducted by the Buddhist monks from the Lingguan temple, led by the Most Venerable Shi Chang Zang Thero, Vice President of Buddhist Association of China with five other monks.

The Independence Day messages of the President, the Prime Minister and the Foreign Minister were read at the event. Addressing the gathering, Ambassador Dr. Kohona stated that despite difficulties faced by Sri Lanka during the 73 years of independence, the people of Sri Lanka have achieved much. He referred to the challenges endured by the people of Sri Lanka in confronting terrorism over a 30-year period, and natural disasters and stated that despite those challenges, Sri Lanka has been moving towards economic prosperity and sustainable development. The Government of President Gotabaya Rajapaksa has developed a clear vision for the development of the country, the “Vistas of Prosperity”.

In particular, he noted that the Independence gained in 1948, was the result of the enormous struggles of 1818, 1848 and other efforts over the years to regain our freedom by our people. He also highlighted the sacrifice in lives and limbs made by the youth of the country to counter the threat of terrorism and separatism which had caused inestimable damage to the nation.

He further stated that the Covid-19 pandemic has affected the economy drastically. Therefore, he emphasised that it is the responsibility of all Sri Lankans to dedicate themselves to face the current challenges collectively, in order to achieve socio- economic advancement. Specifically, he said that the Embassy had the responsibility to dedicate itself contributing over and above the call of duty, to help the Sri Lankan people realise their socio-economic aspirations.

The event was concluded with all the guests being treated to Sri Lankan delicacies.