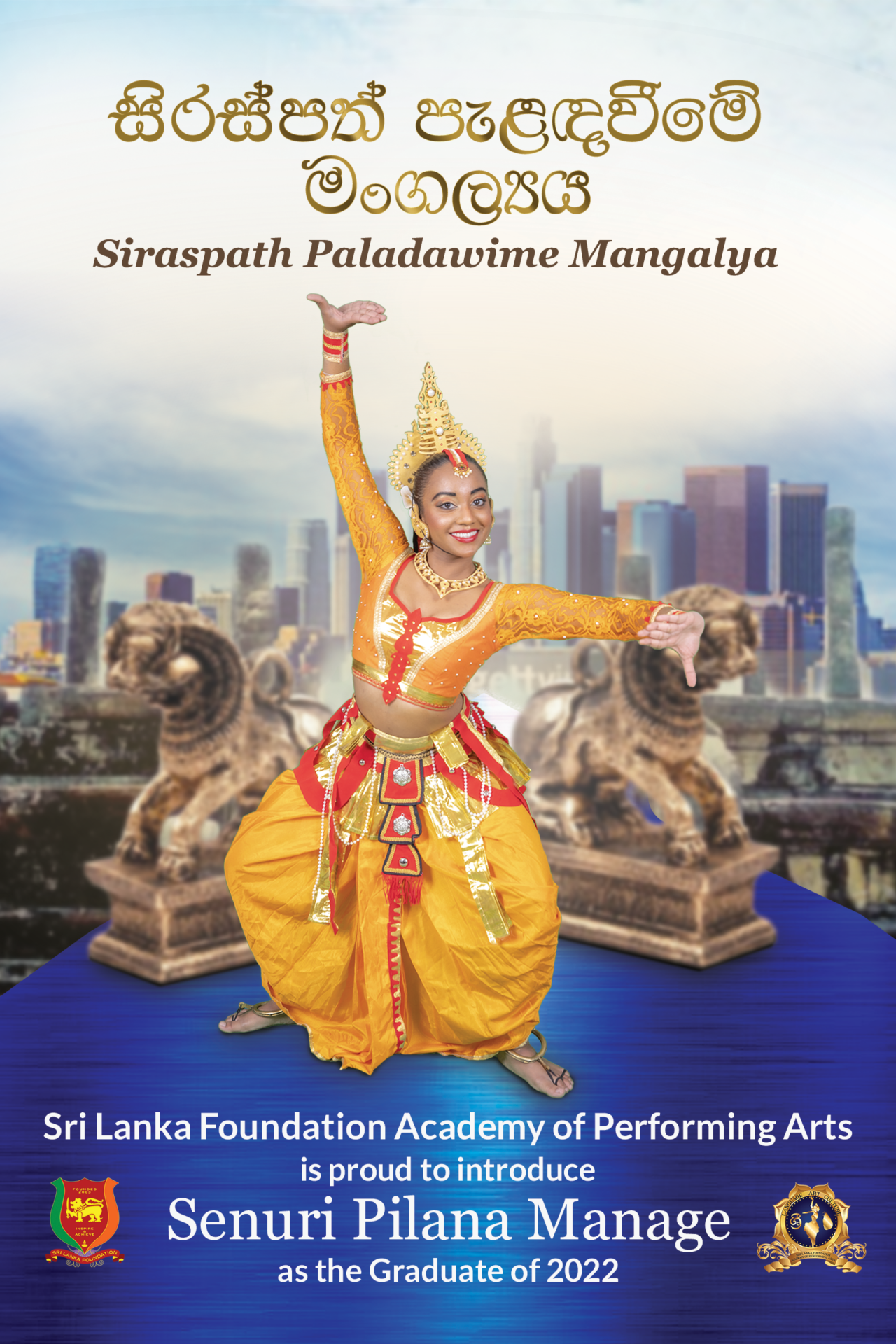 On Saturday, December 10th, 2022, the Sri Lanka Foundation Academy of Performing Arts (SLF APA), founded in 2015 and Accredited in 2019, held its second inaugural graduation ceremony at the Mindfulness Meditation Center in Covina, California.

Senuri Pilana Manage, with her indomitable courage, effort, and commitment, became another successful graduate of Kandyan dance in our second Siraspath Palandaweeme Mangalya (Graduation) ceremony. She is a senior student who participates in online and in-person dance classes at the Academy of Performing Arts in Sri Lanka Foundation (SLF APA). She was exploring to gain knowledge and new experiences through her learning process.

When a Kandyan dance student has been dancing for several years and has reached an advanced level in their techniques, they will take on the Kalaeli Mangalya Ceremony to showcase their capabilities to pioneers, teachers, family, friends, and well-wishers.

This traditional Sri Lankan Dance graduation is also called a “Pahimpath Mangalya.” It is typically considered a rite of passage for young dancers to perform their “Siraspatha.” It is often considered the debut dance of a new generation of tradition bearers that will teach the next generation.

The Ceremony began early Saturday morning, starting with the blessings of Buddha, celestial bodies, and deities. The graduate was adorned with a beautiful “Pahimpatha” given to her by her teacher, the ornate traditional headpiece made of bronze and matching jewelry. According to the customs of Pirith and Magul Bera, the teachers adorned the “Siraspatha” on her in front of Lord Buddha while inside the temple.

Then she was covered in a white cloth and taken around the Bodhi tree. She offered and worshiped the Buddha with a bouquet. Then, after looking at auspicious things and taking away any evil eye, she saw herself for the first time in a pot of clear water dressed in the traditional jewelry made especially for her.

Completing all the traditional customs, she arrived at the hippodrome (Ranga Bumiya) to showcase her talents through performance to the audience. She mesmerized the dignitaries and the audience with exquisite traditional dances such as Mangalam Dance, Yahan Mutti Padaya, and Waram Kavi dance. The graceful and astonishing performances were performed to the sounds of live traditional drums and songs, showcasing her keen knowledge of traditional rhythm.

The traditional ceremony continued when the dancer prayed for her parents, teachers, and drummers to thank them for all their love and support. Then she thanked to the SLF APA Staff, the Director of Cultural Affairs and Director of Operations of the Academy of Performing Arts, Achala Weerasinghe, External Lecturers of APA Nirosha Wijegunasekare and Akila Palipana, and the senior Dance Instructor of APA Umendra Kahadawaarachchi, for their guidance.

President/CEO of SLF, Dr. Dishan Jayasinha, and Mrs. Zuigly Jayasinha graced the occasion as the guests of honor, and the Chief Operating Officer, Shirani Stanislaus, Director of Project Management, Keshini Wijegoonaratna, Media Director, Chamodh Amarasighe attended the ceremony. Dr. Dishan in his opening remarks congratulated Senuri Pilana Manage and said he was very proud to witness her inspiring and memorable performance which showed her dedication and commitment to have mastered the skills to preserve the traditions and culture which is of utmost importance to him. Furthermore, he said the mission of the SLF Academy of Performing Arts is to continue to encourage and support other students to advance their skills and techniques to attain the highest level.

Senuri Pilana Manage, the graduate addressed the guests with a very inspiring and motivational speech, as she expressed, “my sincere gratitude goes to the ones who made my graduation possible, the Sri Lanka Foundation Chairman, Dr. Walter Jayasinghe, the President /CEO Dr. Dishan Jayasinha, SLF Academy of Performing Arts Staff, SLF Staff, your presence and guidance have always been inspirational for me, and I am immensely grateful for all the love, kindness, appreciation and guidance you all showered me to be a successful dancer. It feels great to have so much genuine support around me. Also, I thank my dear family and friends”.

The Ceremony ended with an invitation to all the guests to enjoy a traditional Sri Lankan meal.