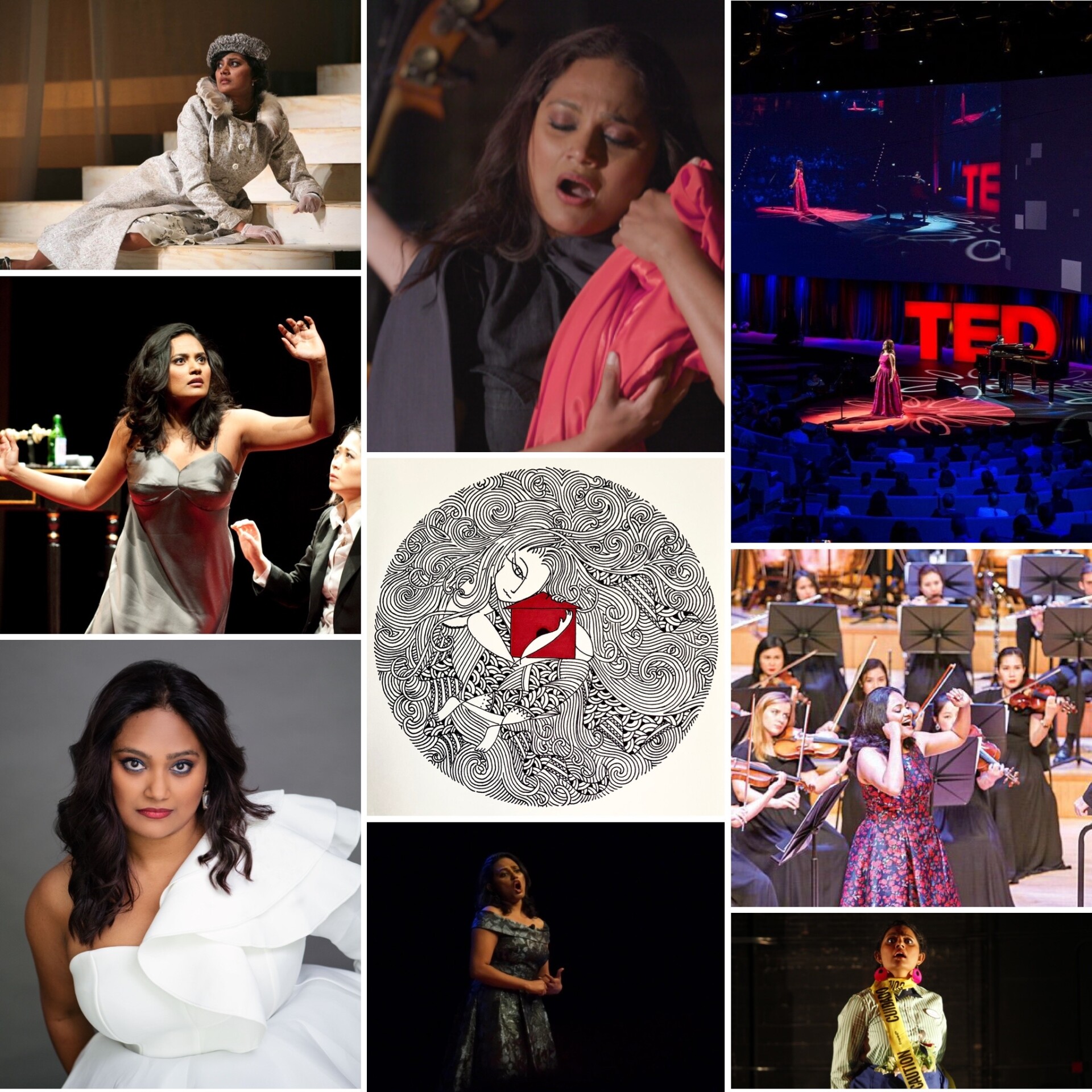 Critically acclaimed opera singer Soprano, Tharanga Goonetilleke was born and raised in Sri Lanka she has delighted audiences with her beautiful voice since she was in grade school. Today and while being frequent performer in the USA Tharanga has also performed to great acclaim in Europe, Canada, India, Uganda, Vietnam and South Korea.

Tharanga made her solo debut as a teenager with the Symphony Orchestra of Sri Lanka (SOSL) in 1998 while she was a student at Colombo’s CMS Ladies’ College, after having won the Concerto Competition organized by the SOSL. At the age of 19 she was recruited to pursue her Bachelor of Music degree in the USA by Converse College (now Converse University), where she was the only recipient of the award ‘Distinction in Opera’ upon graduation upon graduation. She also received a Minor in Biology. Later at Converse’s 125th year anniversary Celebration Tharanga was a recipient of a “Distinguished Alumna” award for her many accomplishments.

“When three female relatives surround Schicchi, helping him to prepare to masquerade as the dead uncle so he can forge a new will, the trio was meltingly gorgeous. Tharanga Goonetilleke, who sang in all three pieces, was a particular standout.” – Anne Midgette, Washington Post.

Tharanga became the first Sri Lankan woman and only the 3rd Sri Lankan to be accepted to attend the Juilliard School in New York City. There she obtained her Master of Music degree in Voice and Opera, as well as her Artist Diploma for Opera Studies. While being a student at The Juilliard School she was a recipient of several awards including The Bori grant for language study abroad, Makiko Narumi Memorial prize, Steve Novick grant and the Sing for hope grant. In 2022 Tharanga was invited to be on the faculty of the “Summer with Juilliard” program as part of the voice faculty.

Although her formal education has primarily trained her as a singer, Tharanga is also a well sort after visual artist. To her, both music and the visual arts serve as languages when words alone fail. Her visual art has mostly been exhibited in galleries in New York and New Jersey. She enjoys working collaboratively between these two forms of art. In 2022 She collaborated with the Glimmerglass festival and illustrated the children’s book, The Jungle Book which was a companion to the Opera “The Jungle Book” by Kamala Sankaram and Kelley Rouke. Another recent collaboration of these disciplines has been designing cover art for music albums such as “Home” and “They still want to kills us” both by the label “Bright Shiny things” (BST).

Tharanga’s multifaceted interests and talents have led her to be a trail blazer. In 2015 her journey, story and success also resulted in her to becoming a TED fellow in 2015. As a TED fellow she has given inspirational talks and performances at both TED and several TEDx conferences.

At present, Tharanga continues to perform as an Opera singer, works as a visual artist, runs a private music studio for aspiring musicians, is a faculty member at The Wharton Institute for the performing arts and serves on the board of trustees at the Visual Arts Center of New Jersey. Tharanga currently lives in New Jersey with her husband and two young children.