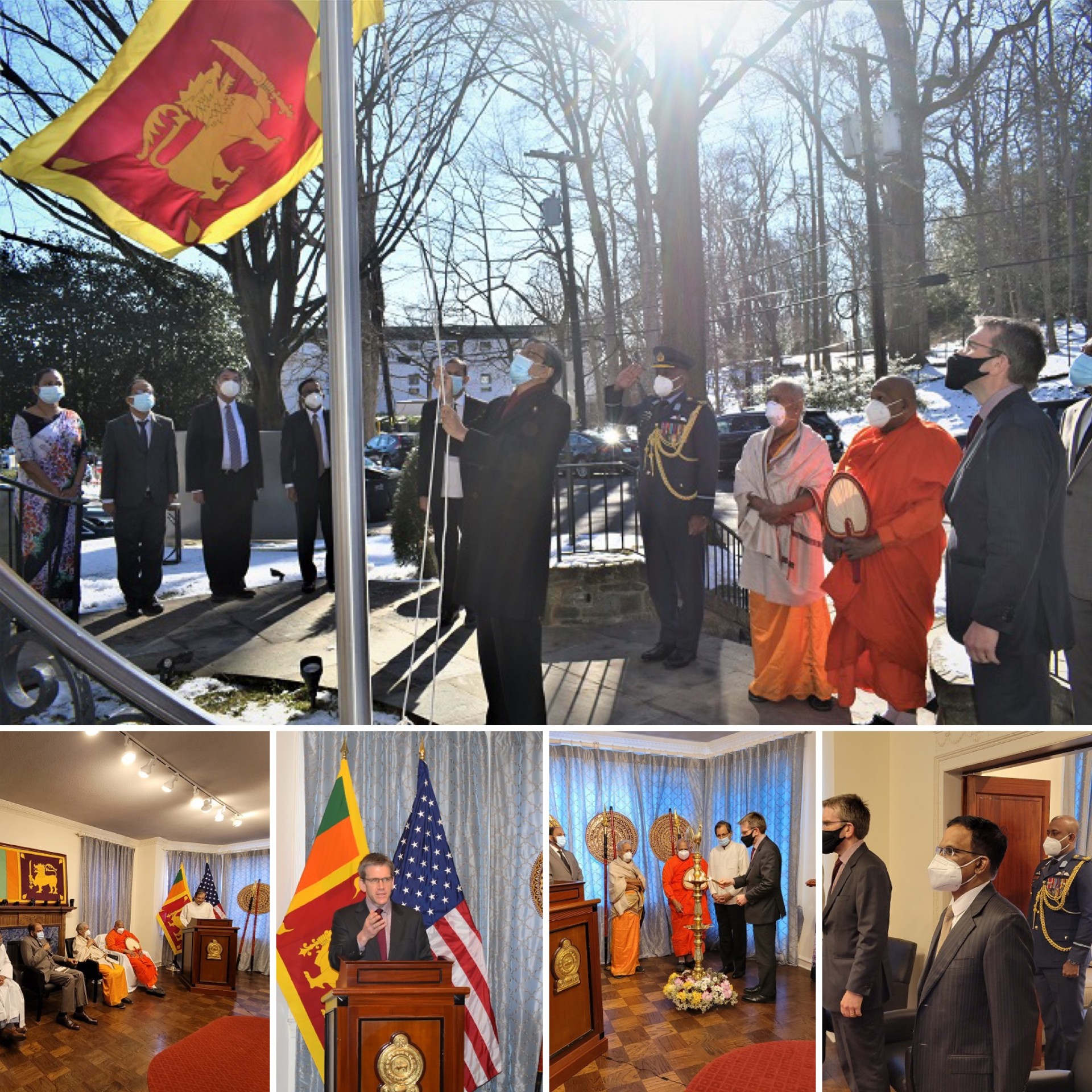 The 73rd Anniversary of Independence of Sri Lanka was celebrated on 4th of February at the Embassy of Sri Lanka in Washington D.C., with the participation of religious dignitaries, representatives from the US State Department and the Embassy Staff, with the Sri Lankan community and friends of Sri Lanka across the US joining virtually in view of the prevailing pandemic related restrictions.

The ceremony commenced with the hoisting of the national flag by Ambassador Ravinatha Aryasinha, amidst the chanting of seth pirith by the Venerable Maha Sangha. The National Anthem of Sri Lanka was sung followed by the observance of two-minutes silence in remembrance of heroes who sacrificed their lives to preserve and protect the freedom, unity, sovereignty and territorial integrity of the motherland. Following the lighting of the traditional oil lamp, the Maha Sangha and members of the clergy belonging to Hindu, Islam and Christian faiths conducted religious observances.

The Independence Day Messages of H.E. the President Gotabaya Rajapaksa, Hon. Prime Minister Mahinda Rajapaksa and Hon. Foreign Minister Dinesh Gunawardena were read out by the staff of the Mission in Sinhala, Tamil and English.

Mr. Dean Thompson, Acting Assistant Secretary, Bureau of South and Central Asian Affairs of the US Department of State who attended the ceremony as the Guest of Honor, in remarks, said he appreciated very much the inclusion of religious observances from the Buddhist, Hindu, Islamic and Christian faiths, as well as the reading of the Independence Day messages in the three languages, which is a reminder that this island nation is made stronger by its diversity. He observed that since Sri Lanka’s independence 73 years ago, Sri Lanka and the United States have been partners in development, drawn together by a shared commitment to protect and promote democracy, human rights, the rule of law and equal justice for all. Noting that the US looks forward to partnering with and supporting the Sri Lankan people as they address challenges, realize the nation’s true potential and draw strength from their diversity, Mr. Thompson said the two countries have many shared values and interests, including fostering economic growth, countering violent extremism, strengthening people to people ties and ensuring a free and open Indo-Pacific region where all countries can prosper.

In his address to mark the occasion, Ambassador Ravinatha Aryasinha extended his appreciation for all who joined the independence celebrations – physically, as well as mainly virtually. The Ambassador who detailed the Sri Lanka government’s priorities at present, and several dimensions of the Sri Lanka – US partnership, recalled President Gotabaya Rajapaksa’s recent congratulatory message to US President Joe Biden, where he assured that “Sri Lanka, under my leadership, based on the mandate received from my people, is committed to further strengthen and consolidate this multifaceted partnership with the United States, grounded in mutual respect, shared values and common interests”. Referring to the key initiatives undertaken by the new Government to address the Sri Lanka’s economic and national security challenges, to strengthen reconciliation, and to promote and protect human rights through domestic mechanisms, Ambassador Aryasinha urged that all pay heed to the facts, without being misled, and recognize the difficult tasks the government of Sri Lanka has embarked upon in a short time notwithstanding grappling with a pandemic that has crippled most of the world. He urged that all work towards unity and development, so that Sri Lanka will prosper and Sri Lanka – US friendship will grow.

Ambassador Aryasinha who noted that on 31 January the Embassy took an ambitious step in launching the ‘Pan-US Overseas Sri Lankans (OSL) Network’, aimed at supporting OSL activities and to leverage their support towards realizing the interests of Sri Lanka in the US, said the core areas of focus of this Network will be – advocacy of Sri Lanka, economic advancement and socio-cultural engagement. Observing that he was encouraged to see the participation of OSLs from 27 States across the US and their commitment towards this new initiative, he said, the Embassy is in the process of expanding this ‘network’ to cover all States in the US. It will also be developing ‘nodal clusters’ across each State, in order to bring together OSLs to work collectively on the areas of focus identified. This network will also have overarching ‘interest clusters’ – including to engage with OSL entrepreneurs, youth, and academics, as well as to reach out to non-Sri Lankan ‘Friends of Sri Lanka’ throughout the USA. He was hopeful that this network will be a powerful vehicle in serving the interests of the OSLs in the US, keeping them connected with their motherland, and in ensuring that they become ‘catalysts’ in taking the US-Sri Lanka relationship to greater heights. Ambassador Aryasinha urged the support of the State Department, to engage the totality of the US based OSLs, so that they become a strength to both their host country, as well as to their home country.

The ceremony came to a close with the serving of traditional milk rice and Sri Lankan sweetmeats to those present.