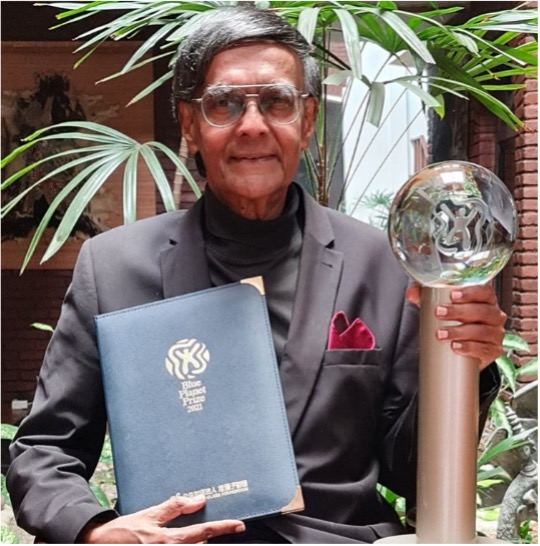 Professor Munasinghe and Mrs. Sria Munasinghe attended the ceremonies for the Blue Planet Prize hosted by the Asahi Glass Foundation in Tokyo, where they were felicitated by Royalty and other grandees of Japan. The ceremony had been postponed to October 2022 due to the Covid Pandemic restrictions in 2021. The Royal Highnesses Crown Prince Akishino and Princess Kiko of Japan granted Prof. Munasinghe and his wife an exclusive audience. In addition, they exchanged mutual felicitations with HRH Sonam Dechen Wangchuck, who attended the ceremony on behalf of her father, His Majesty Jigme Singye Wangchuck, the Fourth King of Bhutan, the 2022 Blue Planet Prize laureate.

His work has influenced significant global accords like the 1992 Agenda 21 and UNFCCC, the 1997 Kyoto Protocol, the 2005 Copenhagen Accord, the 2015 Paris Climate Agreement, and UN 203the 0 Agenda & Sustainable development Goals. Prof. Munasinghe served as vice chair of the UN Intergovernmental Panel on Climate Change (IPCC) that shared the 2007 Nobel Peace Prize. He has received the highest national accolades from the heads of five countries. Additionally, he serves as the President of the Presidential Expert Commission on the Sustainable Sri Lanka 2030 Vision, an Honorary Senior Advisor to the Sri Lankan Government, and a Distinguished Guest Professor at Peking University I,n China.