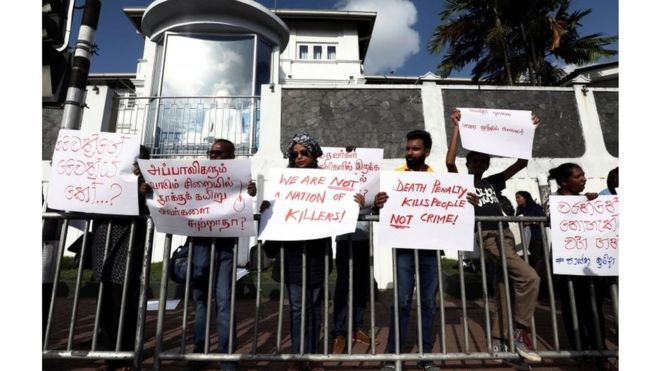 Sri Lanka has recruited two hangmen as it prepares to carry out four executions – the first in 43 years.It follows the president’s announcement that four prisoners convicted of drug offences are to face the death penalty.

The hanging will end a moratorium on capital punishment that has been in place since 1976. Over 100 candidates responded to an advert posted in February for executioners with “strong moral character”.

A prisons spokesman said the two successful candidates needed to go through final training which would take about two weeks.The last hangman resigned five years ago after seeing the gallows and going into shock.

Another was hired last year but did not show up to work.

Why reinstate capital punishment? In Sri Lanka, rape, drug trafficking and murder are punishable by the death penalty but no executions have taken place since 1976.

President Maithripala Sirisena said capital punishment was being reinstated to clamp down on the drugs trade in Sri Lanka.

Political analysts say the move will boost his popularity in the lead-up to an election due to take place by the end of the year. Click Here To Read More Source – BBC