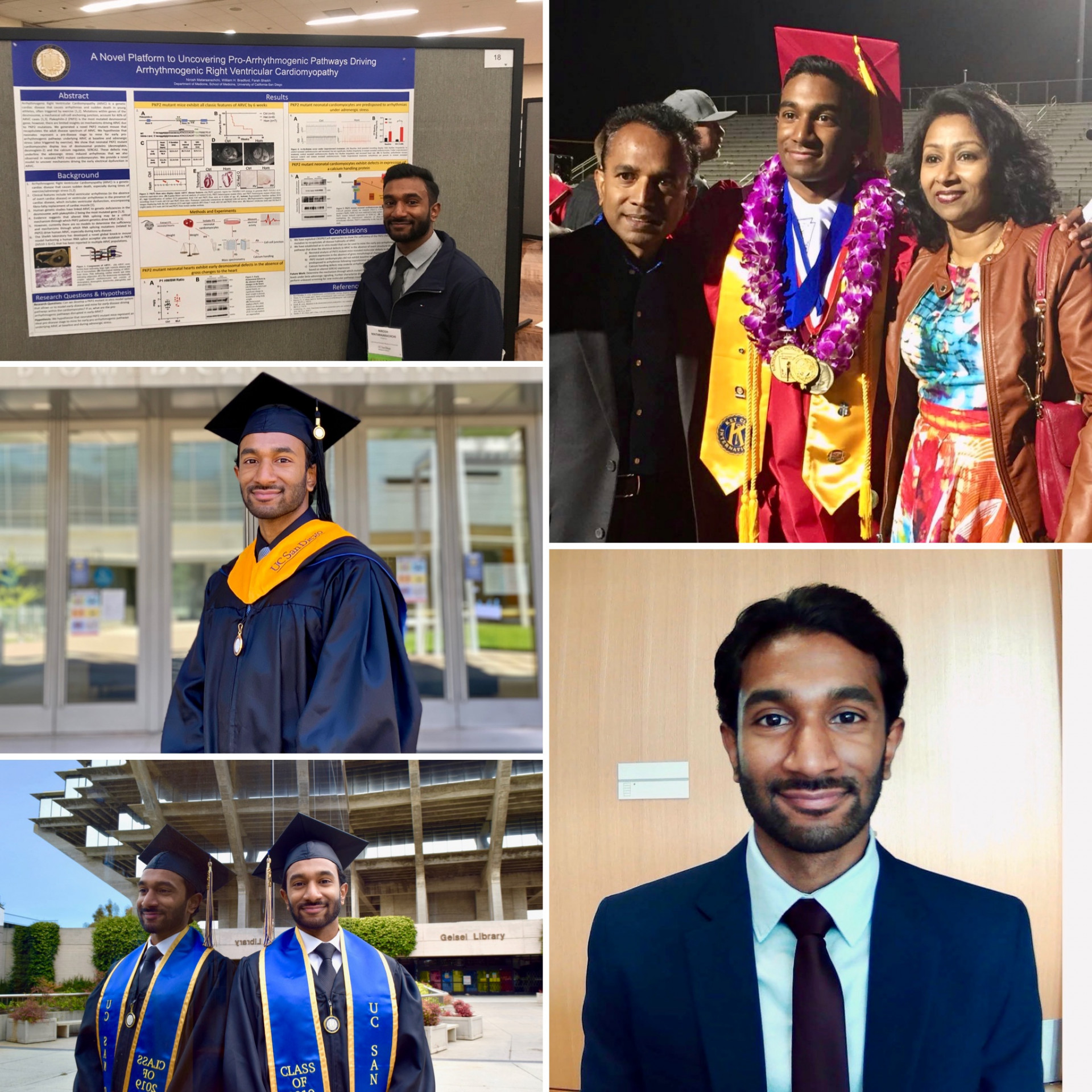 Nirosh Mataraarachchi was born and raised in Los Angeles, California to immigrant parents, Piyal and Janitha Mataraarachchi. Starting from his early childhood and beyond, Nirosh cultivated a passion for teaching, a desire to connect with others, and an understanding of social determinants of health.

As a future physician, Nirosh intends to connect with each patient to first understand who they are as people and what other factors in their life are contributing to their diagnoses. He hopes that by meeting the diverse needs of his patients, he can then empower them to make informed decisions.

Today, Nirosh has accomplished great feats and achievements. Nirosh graduated John Burroughs high school at the top of his class in 2016 and was granted several acceptances to universities throughout the U.S. Nirosh attended the University of California, (UC) San Diego, due to its highly ranked Biology program (#1 in Neurosciences at the time), the vast amount of research in both Basic Science and Translational work, the vast array of clinical opportunities available, a generous scholarship, and its proximity to family/home.

Nirosh was highly involved during his four years at UC San Diego. He was President of a Pre-Health organization on campus where he founded several initiatives to help educate underserved youth on health-risk behaviors as he led a committee of undergraduate students to collaborate and develop seminars. Furthermore, Nirosh was the Founding President of the inaugural Sri Lankan Students Association (SLSA) on his campus, and he helped co-found several SLSAs at sister UC campuses, in an effort to bolster community and belonging for other Sri Lankan students pursuing higher education. Following his passion for education and teaching, Nirosh was also a Teaching Assistant for three years, where he helped teach several upper-division Biology and Psychology courses at UC San Diego, like Metabolic Biochemistry, Human Physiology, Cell Biology, and Behavioral Neuroscience. Nirosh also continued playing American Football, as he did for all four years of high school, and cutting his roommates’ hair throughout college as a Barber. Outside of his extensive extracurricular involvements, Nirosh thoroughly enjoyed his time volunteering in several hospitals and working as both a Medical Scribe and Clinic Coordinator.

Remarkably, Nirosh demonstrated incredible academic excellence as he completed his Bachelor of Science degree in Physiology and Neuroscience with a Minor in Psychology within an extraordinary three years in 2019, graduating Summa Cum Laude, the highest academic distinction placing him in the top 1% of his class. Nirosh received several honors and awards during his undergraduate, including the highly competitive Gabriele Wienhausen Biological Sciences Award, entrance into the Phi Beta Kappa Honor Society, and the Top Honor’s Research Presentation Award at the 2019 Biology Research Showcase. Within one year after graduating, Nirosh completed a Master of Science degree in Biology with emphases in Molecular and Biomedical Science at UC San Diego in 2020, where he continued his Senior Honors Thesis into his Master’s Thesis on Genetic Cardiac Disease. Upon entrance to his Master’s program, Nirosh was awarded the 2019 Diversity Fellowship due to the barriers he overcame in pursuit of his education and his efforts to improve educational access and quality of life for diverse groups at UC San Diego.

Nirosh’s most recent and commendable achievements have been his acceptances to the most prestigious and highly ranked medical schools in the US. To this date, entrance into U.S. medical schools remains the most difficult and competitive admissions process in the U.S. as many elite institutions have acceptance rates of less than 4%, accepting only the top applicants who demonstrate academic excellence, dedication to service, and a passion for medicine and other interests. Nirosh was accepted to 6 medical schools, 3 of which are of the U.S. News & World Report 2022 Top 10 Medical Schools. Within his acceptances, Nirosh was selected for the most prestigious merit-based Geffen Scholarship at the University of California, Los Angeles (UCLA) David Geffen School of Medicine and the highest scholarship awarded at the University of California, San Francisco (UCSF) School of Medicine, both of which fully cover the cost of attendance, which includes tuition, fees, and cost of living. For reference, UCLA received 11,778 applications, 175 students were selected to matriculate, and only 25% of the incoming class were selected for the prestigious Geffen Scholarship. Both UCLA and UCSF Schools of Medicine have acceptance rates close to 2%.

Nirosh is beyond honored, grateful, and ecstatic to have the opportunity to attend medical school and to treat his future patients holistically. Despite his own apparent aptitude and extraordinary work ethic, Nirosh attributes his successes to his overwhelmingly supportive family and mentors, as he states “I am nothing without the support and love of my parents, peers, and mentors. My parents, specifically, emphasized the importance of education, what it means to work hard, and how to show compassion and care to all. Their incredible sacrifices and teachings have helped shape who I am today.”

After much thought, Nirosh will be attending the UCSF School of Medicine, one of the most, if not the most highly ranked medical school in the nation. UCSF was ranked #2 in primary care, #4 in research, and was the only medical school ranked in the top 5 of all 8 specialty areas surveyed. Nirosh plans to practice in Internal Medicine first, before possibly specializing in Cardiology, Gastroenterology, or Oncology. Of significance, UCSF was ranked #1 for its Internal Medicine residency program, in front of Harvard University. To this date, UCSF has remained the #1 public university medical school in the US for over ten consecutive years due to its excellent clinical education, extraordinary faculty, and world-renowned research.

We share this news, today, in an effort to not only showcase and congratulate our fellow Lankan, Nirosh Mataraarachchi, on his incredible achievements but to also inspire and motivate other Sri Lankan students aspiring to attend medical school and practice medicine in the U.S. Please welcome us in congratulating Nirosh!

Feel free to reach out if you have any questions.