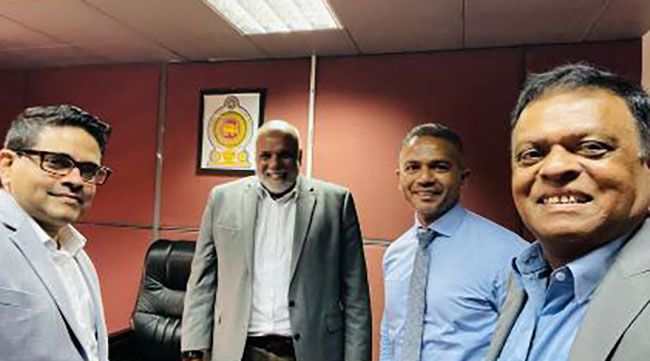 The Sri Lanka-America Chamber of Commerce (SLACCOM), America’s nationally founded conduit for the promotion of trade, commerce and investment between Sri Lanka and the US, initiated the twinning of Colombo Port City and the City of Las Vegas, latter the global convention capital, to the delight of Sri Lanka’s Board of Investment (BOI) chairman Raja Edirisuriya, in a productive dialogue he had with the Chamber.

In mid-January, the two-hour discussion on promoting investment, trade and commerce between the two nations, and most importantly the proposal to twin the two cities envisaging enhancing economic corporation, between Edirisuriya and the representatives of the SLACCOM, its president Sanje Sedara, Deputy President, Aruna Abayakoon and directors Douglas Perera and Daya Gamage took a positive turn when the BOI chief expressed his support and undertook to get Sri Lanka government’s serious concern to a range of proposals which emanated from the Chamber, SLACCOM spokesperson said.

During the dialogue – held in the United States – between the Chamber and the BOI Chief, it was disclosed that attracting conventions to Colombo Port City can be tied in to the Las Vegas Visitors and Convention Authority which will act as a strategic partner to cross market conventions for Sri Lanka. Las Vegas has links with all the major cities and municipalities worldwide: resulting in countless cross-cultural business and education opportunities.

During the discourse between the Chamber and BOI Chief Edirisooriya, what emerged was that many of the new companies which are moving to Las Vegas are tech related and that Sri Lanka and Colombo Port City could get the necessary visibility by aligning with these companies. Colombo Port City will also have an opportunity to attract the US based tech companies to invest in Colombo Port City by expanding the economic zones by offering its quality work force and various tax incentives, it was disclosed.

In early January, three officials of the SLACCOM – deputy president Aruna Abayakoon, directors Douglas Perera and Lalindra Wickremaratne – were in Colombo meeting the officials of the BOI, one of whom was Executive Director Prasanjith Wijayatileke, and Export Development Board (EDB) Chairman Suresh de Mel to discuss trade, commerce and investment using the City of Las Vegas, the global convention capital and the all-year meeting venue of economic activists from far-away lands.

The discussions at Colombo meetings were made available to BOI Chief, Edirisoriya when Sri Lanka-America Chamber of Commerce officials had discussions with him in the United States.

The Sri Lanka-America Chamber of Commerce three-member delegation that met BOI Executive Director Prasanjith Wijayatilake in Colombo apprised that with more than 10.5 million square feet of convention and meeting space, Las Vegas hosts nearly 60 of the 200 largest conventions and 20,000 meetings annually. 49.5 million people visited Las Vegas in 2019 , according to the Las Vegas Visitors and Convention Authority. For the 11 months of 2021, visitor volume is at 29.23 million, a 64.3 percent increase over 2020 but 25.2 percent below pre-pandemic 2019.

During the Chamber officials’ discourse with EDB Chairman Suresh de Mel in Colombo trade shows (Las Vegas being a trade convention capital), explore opportunities in trade shows that EDB does not participate and support with resources, finding markets for a multitude of Sri Lanka’s export products such as Agri, hand crafts, IT solutions, wellness tourism, fisheries among others were raised.

The SLACCOM, whose professionals a drawn from every productive sector and regions in the United States, decided to base its functions in the City of Las Vegas in the State of Nevada as the city – for decades – developed its infrastructure to host global conventions and attract trade and commerce leaders year round.