Melani Amarasekara won the lone point for the Spartans, an 8-2 singles win. 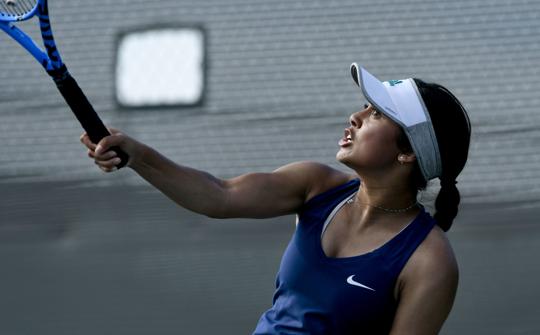 In a non-league, cross-sectional contest held at Hancock College, Cabrillo cruised to an 8-1 win. The match was played under CIF Central Section rules, with six singles matches and three doubles matches.

Kayla Kling won her singles match 8-1 and then teamed up with partner Isabella Morales to win a doubles set 8-0. The Conqs scrimmaged twice last week, but Monday was their regular-season opener against the Spartans, who are now in the Ocean League after playing in the tougher Mountain League last year.

The Round Table has returned.

“We determine how we win and we determine how we lose,” Hohimer said of his team’s new mindset. “We teach the techniques, the girls go out there and play and enjoy and have fun with the things they learn and execute. It’s not about the win-loss column, but executing your game. The other day, when we beat Santa Maria 7-2 in a scrimmage, we actually celebrated the two players who lost their sets.

“That’s because we saw that they had a fighting spirit and that’s something we celebrate.” Rachel Carlos, Cabrillo’s lone senior, scored a doubles point with Sikes 8-5. Isabel Hapil and Isabel Clifford teamed up for another Cabrillo doubles win.

Orcutt Academy’s Melani Amarasekora won the lone point for the Spartans, an 8-2 singles win. Hancock College’s rodeo team got a big boost from Hancock Boosters on Saturday night — a nearly $100,000 boost. The boosters and team supporters packed the banquet hall at the Santa Maria Elks Lodge for the inaugural rodeo team fundraising dinner and auction.

“Cabrillo is definitely a little more experienced than we are,” said Orcutt Academy coach Art Lopez, who added that he has four returning players from a year ago. “A bunch of freshmen, some newbies. We’re lacking in experience, but I saw some pluses today. It’s things we have to work on, but it’s really about experience right now.” Lopez said his group is excited to be back in the Ocean League, where they should be more competitive.

“We’ll be good once league starts,” he said. Orcutt takes on St. Joseph, a Mountain League team, on Wednesday, before starting league at Templeton on Thursday. “Today was just trying to get some of these younger freshmen used to varsity tennis,” Lopez said. “Most of the girls don’t have varsity experience so that’s what we’re focused on. Just getting them exposed to this.” Source – Santa Maria Times