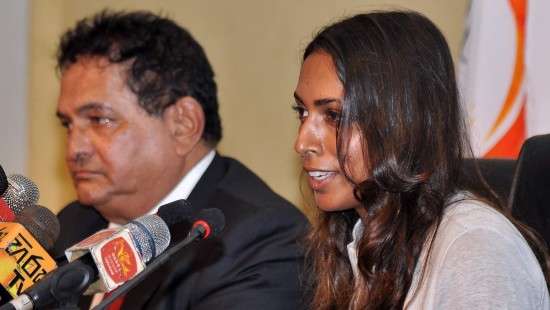 She may be the first ever showjumper representing Sri Lanka to qualify for the Olympics, but Mathilda Karlsson has targeted more than just participation at this year’s Tokyo games.

The Sri Lankan-born, Swedish-raised equestrian athlete, who is so far the only athlete from Sri Lanka to qualify for Tokyo 2020, on Thursday said that she had set her eyes on qualifying for the final stage of the showjumping competition, and maybe even challenge for a medal.

“I am very excited (about competing in the Olympics). I have surrounded myself with good people who will help me get to Tokyo very well prepared. My goal is definitely to qualify for the final round, hopefully (win) a medal. It’s realistic to make the final round when you look at the results I have had in the last year,” Karlsson said.

Karlsson’s qualification to the games was secured when she and her horse, Chopin VA, finishing second in the Olympic Ranking for South East Asia and Oceania at the end of the qualification period last month.

With the rules of competition tying the points a show-jumper accumulates in a season to the horse they use, Chopin VA will travel with Karlsson to compete in Tokyo.

In the last year, Karlsson has enjoyed a meteoric rise in the Longines FEI Jumping Rankings, making up almost a thousand places, and moving up to 280 in the rankings along with qualifying for the Olympics, although at one stage it appeared unlikely she would make the cut for the showpiece event.

With Chopin VA diagnosed with lyme disease, Karlsson had to make the difficult decision of allowing her horse to recover for five months, severely hampering her chances of booking her ticket for the Tokyo games.

But with Chopin VA returning to competition a month before the end of the qualification deadline, Karlsson and her horse were able to collect the 250 points she required to meet Olympic qualification. She hopes that the Olympics will be a platform for her to make even more ground in the sport.

“My target is to reach the top 100 in the world ranking,” Karlsson added.

Karlsson, born in Kandy, was adopted by a Swedish couple when she was just three months old, growing up in Kristianstad, Sweden before moving to Germany where her passion for equestrianism blossomed into a career.