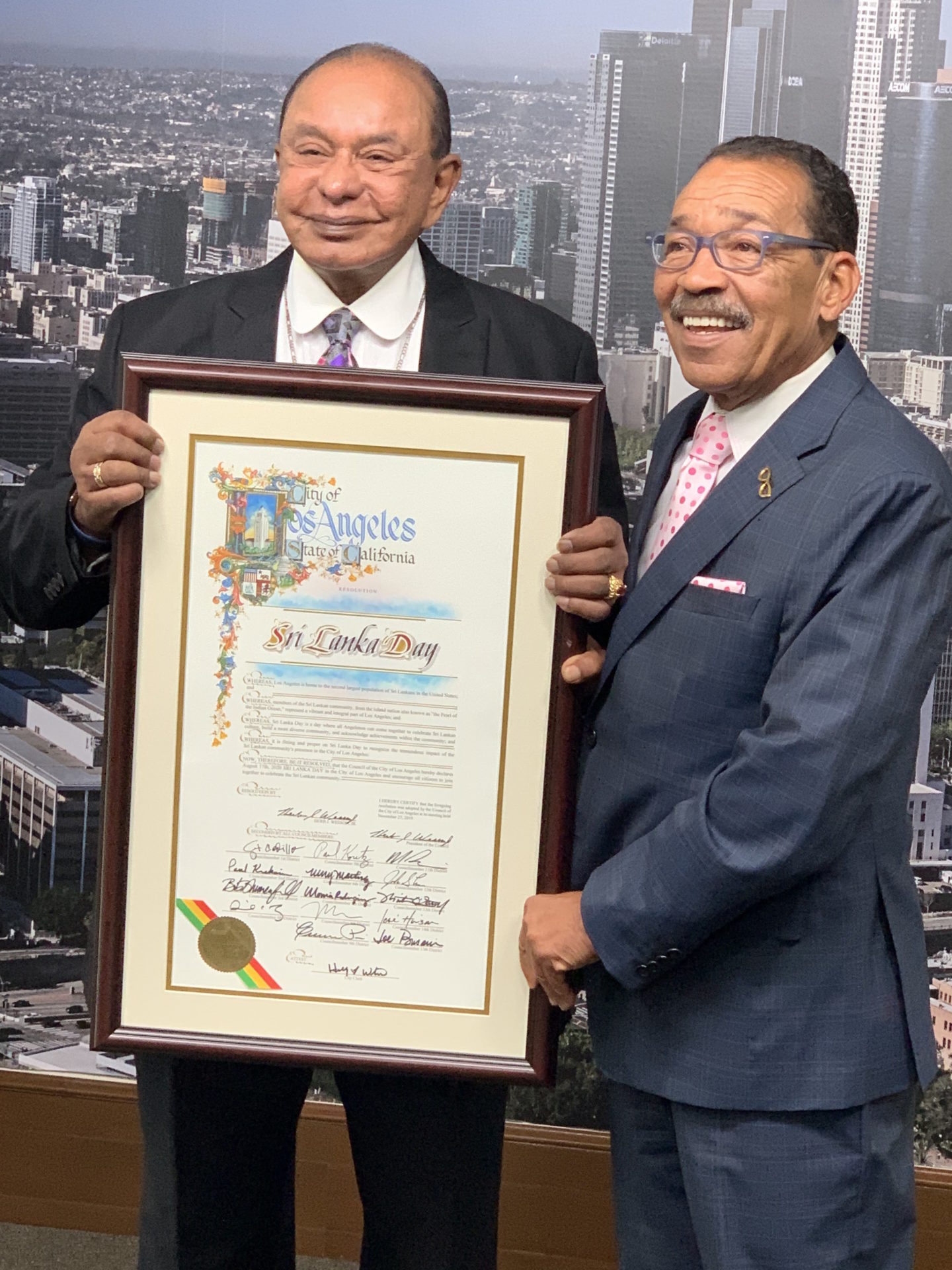 History was created within the walls of the magnificent Los Angeles City council chambers on a rainy morning amidst a gathering of distinguished leaders , where a community came together to celebrate Dr. Walter Jayasinghe and his invaluable philanthropic services rendered to this beautiful city of Los Angeles and the Sri Lankan community.

Herb Wesson The President of the City of Los Angeles City Council celebrating diversity declared the official celebration of Sri Lanka Day in Los Angeles amidst a very hearty welcome to the lion nation, Sri Lankans gathered to witness this auspicious moment. His very patriotic words recognizing the lion in the flag which he stated symbolizes courage and represents pride, was definitely what every Sri Lankan present there felt in their hearts watching him speak.

The distinguished, Herb Wesson President of the LA City Council in recognition of Dr. Walter Jayasinghe’s extraordinary achievements and outstanding support to the community recognized the fact he was one of the first doctors to start a practice of a 24 hour clinic where everyone was welcomed to walk in and get diagnosed at any time, day or night. Apart from that Dr. Walter Jayasinghe is a visionary, entrepreneur, creator and also the founder of the Sri Lankan Foundation in Los Angeles, California which was founded in 2003.

The president went on to say how excited he was when the first official meeting was scheduled to meet Dr. Jay thinking it was the ever famous basket ball player who was renowned for his basketball dunks in the court , nevertheless he was not disappointed to meet with Dr. Jay and 20 years of friendship later, he presented the plaque which stated the official celebration of the Sri Lanka Day in Los Angeles on the 17th of August every year which also happens to be Dr. Jay’s birthday , in front of the City Council and other distinguished members of the community and Dr. Jay’s family and friends amidst a roaring applause from everyone present. He concluded his speech by acknowledging this great man standing beside him by expressing this about Dr. Jay , Success is a debt , and Dr. Jay has spent his life attempting to give back to others for his success. He firmly believes that as he Dr. Jay climbs up the ladder of success he turns around and pulls somebody else with him and that is what makes him so special.

The man himself Dr. Walter Jayasinghe humbly saluted the president and the members of the City Council for bestowing him this great honor and thanking President Herb Wesson for their friendship of 30 years and for the hard work he has done for the city himself. Even though it was pouring outside the walls of the City Council Chambers , it was only smiles, laughter and gratitude that filled every heart present. It was a memorable moment for the next generation, a start of a new tradition and a legacy was created that forever changed the path for our future generations. Thank you Dr. Jay and the Sri Lanka foundation.

Following the presentation, the audience was ushered to a reception where the traditional oil lamp was lit by Dr Jay, his family members staff and other distinguished guests, and right after people were treated with delicious Sri Lankan traditional food. This culminated the presentation of the Proclamation declaring ‘Sri Lanka Day’ on August 17th of every year. 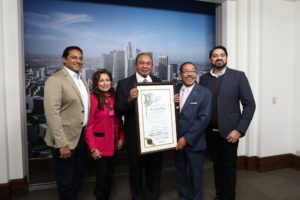