MENUMENU
News ≫ Honoring the Tipitaka or Reading it?

Honoring the Tipitaka or Reading it? 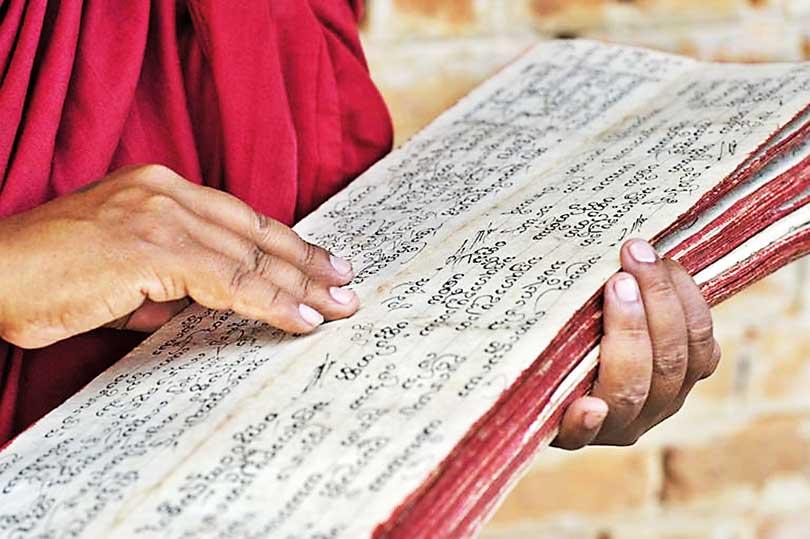 It is good to know that the Pali Tipitaka has been given the recognition it deserves by being designated a part of the National Heritage. It is also fitting that the announcement of this designation has been announced by President Sirisena at Aluvihara, where the Tipitaka was first committed to writing. While the president, his retinue and the assembled guests were at Aluvihara some of them may have noticed and read the dedication stones in and around the temple because if they did it might have given them pause for thought.

It was at Aluvihara where the Tipitaka was first committed to writing The Chief prelate of Aluvihare established a library in the temple Now the sacred scriptures have been given National Heritage status Volumes of the Tipitaka available so far, can only be had from two or three outlets in the whole country In the early 1950s, the then chief prelate of Aluvihara conceived the idea of establishing an “international library” in the temple. This was during the build-up to the 2500 Buddha Jayanthi in 1956 and excitement and enthusiasm by the world’s Buddhist was electric. Considerable amounts of money were raised for the library, grandiose plans were announced, Prince Norodom Sihanouk of Cambodia laid the foundation stone, – and after all the hoopla other than erecting a building nothing else was ever done. And with good reason. The temple is outside Matale, a small rural town today, even smaller in the 50s, several of Ceylon’s universities already had fairly good libraries of Buddhist books; neither Aluvihara’s chief prelate nor any of his monks knew anything about librarianship (and never made any effort to learn it); and they had neither the competence nor the know-how to guide any scholars who might come. It wasn’t “international”, it wasn’t national, it was hardly even local. Rather, it was a genuine but utterly unrealistic dream conceived for no other reason than that there was supposedly a library at Aluvihara over 2000 years earlier.

The point of this story is that before any worthwhile project, if it is to be successful, there needs to be clear and attainable goals set and a strategy decided upon to achieve them. Then, after all the big ceremonies there has to be follow-up where the strategy to attain the goals is implemented and carried through. Has anything like this been done as part of making the Tipitaka an object of National Heritage, or is it just another empty gesture, a sop to religious and national feelings, a way for politicians to make it look that they are doing something meaningful? It need not be.

Recently Dr. Upul Wijayawardana (Daily Mirror March 20, 2019) pinpointed several of the problems in Theravada in Sri Lanka and suggested ways these could be tackled. That there are problems in how Buddhism is understood and practiced and need to be rectified seems to me to be without question. But there is one thing that could be done which Dr. Wijayawardana could have included. Now that the sacred scriptures have been given National Heritage status, perhaps it’s time some effort is made to encourage people to read it and become familiar with it. If there are misunderstandings about the Dhamma, and there are, this is mainly due to the fact that people get their understanding of the Dhamma from tradition and custom rather than from the Buddha’s own words. It is true that little tracts containing the Mangala Sutta, the Metta Sutta, the SigalovadaSutta, etc. are widely available but there is more, much more to the Dhamma than this.

Efforts have been made to rectify this situation before. With the approach of the Buddha Jayanthi in the early 1950s calls were being made to make the Tipitaka available in ordinary languages. The government in Ceylon undertook to do this, but as seems that the initial enthusiasm soon slowed to a crawl and 60 years after the project started it is still not finished. But beyond this unexplained delay are other problems. Each volume of the Sinhala Tipitaka is very large and even two or three copies would be quite expensive for the average person. Then there is the problem of accessibility. I cannot read Sinhala, but monks who can tell me that the language in the translation is high Sinhala; archaic and difficult to read. Several monks have even told me that they actually find it easier to read the Pali than the old-style Sinhala. But it gets worse! Even if you were prepared to persevere and struggle to understand the language, just trying to get a volume requires time and trouble. The volumes of the Tipitaka available so far can only be had from two or three outlets in the whole country. The Bible by contrast is available in nearly every hotel room in Sri Lanka, but trying to find the Tipitaka remains a desiderata.