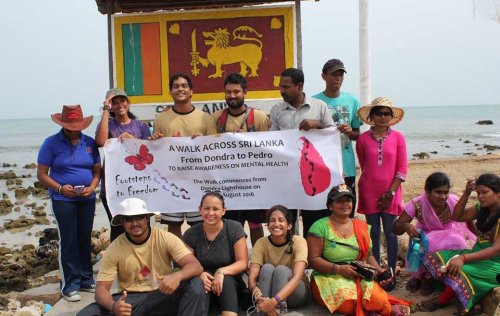 In 1995, Sri Lanka reported an approximate 47 deaths by suicide per day for every 100,000 persons. Over two decades later, the country reports an approximate 8-10 deaths due to suicide per day in 2018. The number of attempts at death have increased to an average of twenty. These are just reported statistics; combined with those unreported, Sri Lanka remains a country with an above average rate of suicide- and consequently, with a below average level of satisfactory mental health.

“Footsteps to Freedom” was curated by counselling psychologist Nivendra Uduman in 2016 and demonstrated a successful reach with over 100 workshops conducted in 44 days due to his commitment to raising awareness on these issues.

This year, he is joining hands with colleagues for a second journey around Sri Lanka. “Footsteps to Freedom is an initiative that aims to shatter the stigma on mental illness and encourage those suffering from mental illness to seek help. With the 2018 walk, we also hope to connect deeply with people from all backgrounds and communities, empower them to seek help for themselves and to look out for the wellbeing of their community,” said Uduman.

The walk (scheduled to start on April 01st in Mount Lavinia) will consist of a series of planned and unplanned awareness raising sessions for established organizations and schools along with tea shops, bus stands and smaller village community gatherings throughout the period of 72 days.

The sessions will focus on how one can recognize warning signs of those at risk of suicide, helplines available, actions an individual can take prior to seeking professional help etc., all of which will contribute towards creating a sustainable foundation that would promote better mental health and psychosocial wellbeing.

The World Health Organization predicts that depression will be the leading cause for disability by 2020. WHO also reports that 322 million in the world currently suffer from depression, with nearly 800,000 deaths by suicide occurring annually.

In his first 550 km+ walk around the country, from Dondra to Point Pedro, Nivendra conducted over 100 sessions to raise awareness on mental health in 44 days. In 2018, Uduman is walking once again with Ranil Thilakaratne, from the CCCline 1333 and Sara Nazoor, a trainee psychologist over a span of 72 days covering approximately 1400 kilometers. The walk will be in aid of two charities working in the areas of emotional wellbeing and suicide prevention in Sri Lanka: CCCline1333 and Shanthi Maargam