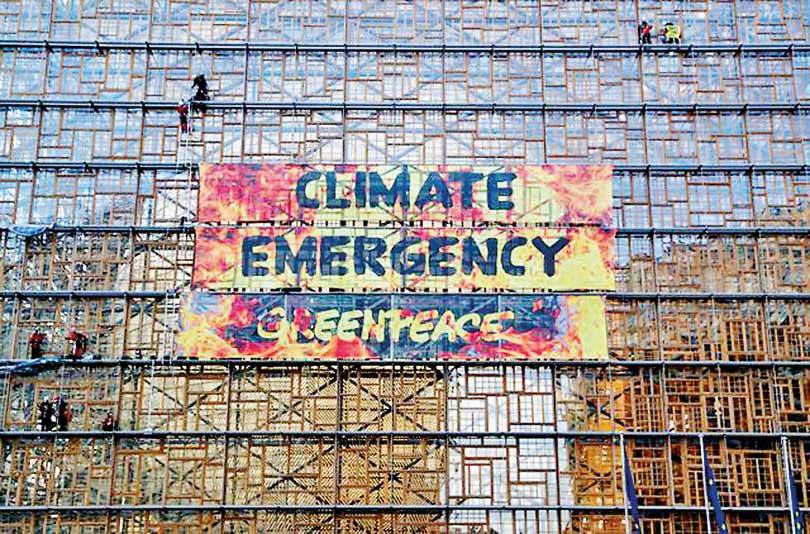 Climate change activists from Greenpeace display a banner outside the EU Council headquarters, ahead of an EU leaders summit in Brussels in 2019

Climate change could become a “catastrophic” threat to global security as people lose their livelihoods, fall ill and battle over scarce water and food, a host of US security, military and intelligence experts warned last Monday.

Pressures from global warming could intensify political tensions, unrest and conflict, fuel violent extremism and break down government security systems, the experts said in a report by the Centre of Climate and Security, a nonpartisan policy institute. War-torn countries in Africa and the Middle East were cited as most at risk, but industrialised regions were vulnerable, it said.

“Even at scenarios of low-warming, each region of the world will face severe risks to national and global security in the next three decades,” the report said. “Higher levels of warming will pose catastrophic, and likely irreversible, global security risks over the course of the 21st century.” Concerns over the impact of climate change have led to calls to reduce greenhouse gas emissions and slow the pace of global warming amid instances of climate-related extreme weather such as wildfires and floods. A United Nations report last year warned of dire consequences as well.

The research released on Monday warned of displaced populations driven from their homes by rising heat, drought and dwindling water and food supplies. Disease would spread and border security and infrastructure break down as resources grow more scarce, fueling extremism, crime and human trafficking, it said.

Disease would spread while border security, infrastructure would break down as resources grow more scarce “We’re really looking at a bleak future if we see more and more countries become fragile,” said Rod Schoonover, a former intelligence analyst and co-author of the report, who spoke at a briefing. Panel members included former US government security officials and climate security experts. The experts assessed threats under two scenarios – if the planet warmed by 1 to 2 degrees celsius or by 2 to 4 degrees celsius – by the end of the century. The UN has warned that if emissions were not drastically lowered, the average global temperature would increase by 4 degrees celsius by then. A global pact to fight climate change was agreed upon at Paris in 2015 that aimed to keep the earth’s temperature rise well below 2 degrees celsius. The administration of President Donald Trump has initiated efforts to pull the United States out of the Paris Pact. “I don’t mean to be a doomsayer but this is bad stuff,” said retired Gen. Gordon Sullivan, a former US army chief of staff, who spoke at the briefing but was not directly involved in the report. “My question is whether the US is going to lead or are we going to stand around and watch?’” he said. “We need someone to step up and say ‘I’ll do it. Send me.’”