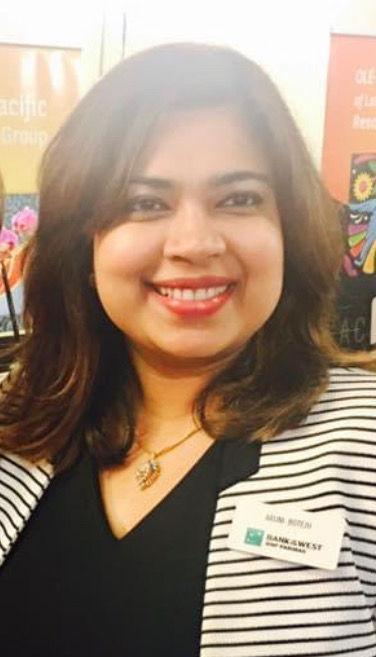 “Many told me I am crazy to drive 200 miles to work, and to attend events and volunteer my time and do the things I do, they asked me how do I do it? I said, I just do it just like Nike, JUST DO IT”.

Sri Lankan-American, Aruni Boteju is Assistant Vice President, Small Business Banking Officer at Bank of the West/ BNP Paribas in Southern California. She is a mother of two children and resides in Santa Barbara, California. Aruni’s parents Ariyadasa and Manel Horanage moved to the United States of America in 1996 with their three daughters. Aruni is the oldest of three daughters.

Aruni had her early education at Buddhist Ladies International College, in Colombo 07. She continued her studies at Santa Barbara City College. She earned her Bachelor’s Science in Business at the University of Phoenix and working towards her Master’s in Business. Aruni started her banking career with Bank of America in 1999 as a part time teller. She stated, “In those days it was hard to get into banking, I had to do an exam to be hired, and I failed the first time”. I had to reconsider the credit and debits I learned in school to banking credits and debits”. She moved from Bank of America to Wells Fargo Bank, Santa Barbara Bank and Trust, Heritage Bank to Bank of the West. “I was very blessed to work with many people, who supported me in my career. I learned from my mentors and from my client. I believe life is too short for us to learn from our mistakes. We must listen and learn from others as well. I was always willing to take that chance or the risk to make myself better person and improve myself.

Many believe she’s an extravert, but she is combination of both introvert and extrovert. “There are times you want to be alone, step back and do things on your own and observe others. Also, I believe in team work as well. You can go fast when you are alone, but you can go far when you have a team to support” she said. Aruni was part of schools’ Net-Ball team, and won many tournaments and she was part of the Gymnastic team which bought pride to the school. Articles were written in papers as “Girls with Sheer GUTS” for their braveness to jump off from fire hoops during sports exhibitions and meets.

Aruni is very passionate about dancing and drama as well. She learned traditional Kandyan dancing from school dancing teacher Mrs. Thilaka Wejayesinghe , Bharthnatyam from Guru Padmini Dhanayaka, and learned Kathak at Sausiri Paya in Colombo early 90’s. Aruni was granted with an opportunity to go to Shanthi Nikethan in India to further study Kathak. She has an opportunity to be part of famous legendary Kala Suri Somalatha Subasinghe’s team for stage dramas and had the opportunity to work with many well-known artists in Sri Lanka.

“I had a very blessed life in Sri Lanka” said Aruni. At the age of Fourteen, she was invited to do TV commercials and many were main roles. “I remember my first, TV advertisement was a Pepsi ad with the gypsies.

Aruni continued to be involved with the Sri Lankan community in Southern California since the family moved to California. “Our mother was determined to keep us involved with the community and continue to be part of the cultural events. She taught dancing to her youngest sister Ruwani Horanage and remained as a silent choreographer to the community for a long time. She is one of the first choreographers to Ranwan Rayak in 2006. Aruni was the main choreographer for a tribute to Maestro Pandith Amaradeva concert in 2013. In 2014, she organized USA tour and directed and produced a musical evening “Aaradhana”, with Maestro T.M Jayarathne and Maestro Pradeepa Dharmadasa. Aruni is an Executive Producer for “Lost Flyers” movie Directed by Sudesh Managodage, which is in post-production now.

She believes is in diversity and helping and strengthening people, especially women. She is a part of a nonprofit organization that helps young girls and women in Kenya. Friends of WONI helps young women to have English education and provides hostels, so young girls do not have to walks 10 miles to schools. Also, organization helps with clean water to drink program as well.

Aruni’s involvement and volunteer work were appreciated and recognized by her management at Bank of the West and awarded her with Best Community involvement awards for two years in a row.

“I am proud to be a part of the Bank of the West and our parent company is BNP Paribas. As a bank for the changing world, the Bank is committed to sustainable financing. The Bank is taking action to support activities that help protect the planet, improve people’s lives, and strengthen communities. We are redefining banking for a better future by focusing on areas where we believe we can have an impact. Supporting energy transition, helping enable women entrepreneurs, and financing innovative startups: she stated.

Bank promotes diversity and inclusion as a vital part of the success and future of the Bank. I had the opportunity to held a position as Co-Chair for Banks Asian Pacific Resources Group in Southern California for two years.

Aruni’s main focus is small business owners as a business banking officer. The COVID-19 handicapped the world economy. The fear of higher inflation has captured the imagination of consumers, business owners and investors. Small businesses can survive a surprisingly a very long time without making any profits. But it will fail on the day it can’t meet a critical payment. Today many of these businesses in trouble due to the COVID-19. Some are forced to close the businesses. A common explanation was a lack of cash flow. Liquidity is the lifeblood of any business making cash flow more important than profit or the return on investment.

In conclusion, Aruni stated “I have faced many obstacles in my journey, there are times I was paralyzed with my own thoughts, doubts and problems. I believe in God, we are here for a reason, a purpose. We don’t live once, we live every day and die once. During that time how we want to live is a choice we have, it is our right. You do not have to make only lemonade from the lemon, there are many things you can do with that lemon. Use your imagination and create the world you want to live in. I was a dreamer, still I am and will be till the day I die”.