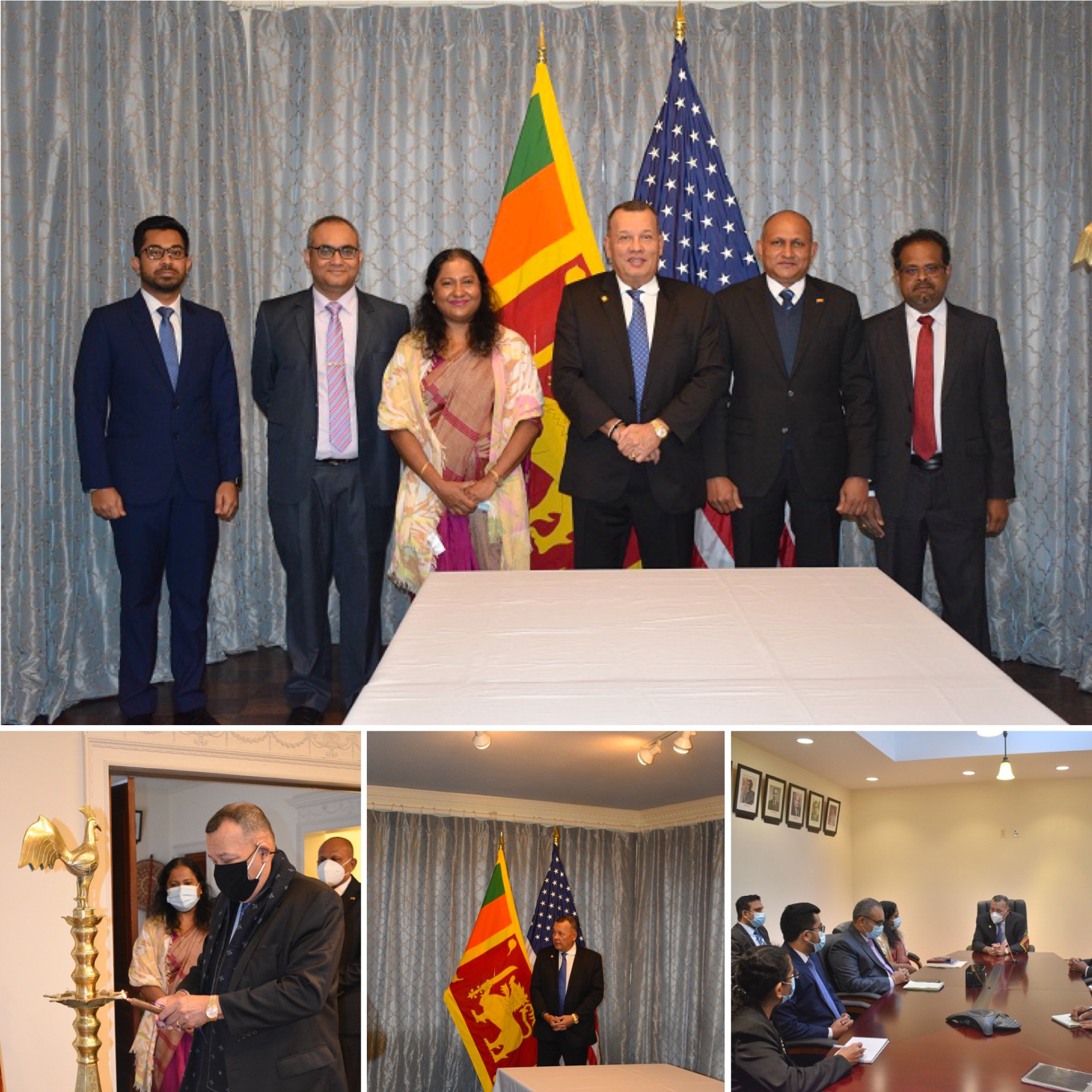 Ambassador Appointed of Sri Lanka to the United States of America Mahinda Samarasinghe assumed duties at the Embassy of Sri Lanka in Washington D.C. on 2nd December 2021. Prior to his appointment as the Ambassador to the US, Ambassador Samarasinghe was a former Member of Parliament under His Excellency the President Gotabaya Rajapaksa’s Government, and the Sri Lanka Podujana Peramuna Chief Organiser for the Panadura Electorate in the Kalutara District. He was a senior politician having served country as a parliamentarian for 27 continuous years. He has also held national executive office including as a Cabinet Minister for over 19 years, in addition to earlier serving 6 years as a Provincial legislator and Minister.

Upon arrival at the Embassy in Washington D.C., Ambassador Samarasinghe was welcomed and greeted by the staff. His assumption of duties was marked by a simple ceremony which commenced with the lighting of the ceremonial oil lamp by the Ambassador and the other staff. Speaking on the occasion, Ambassador Samarasinghe thanked the staff for the warm welcome and expressed his optimism that the relations between two countries would be further strengthened and expanded encompassing all areas of the interest during his tenure. Further to that he mentioned the relationship with the USA is very important to Sri Lanka in different areas concerned. He also requested all staff to increase their efforts and dedicate themselves to serve motherland with commitment and dedication. Ambassador also emphasized the importance of keeping all Sri Lankan community engaged at all time with the promoting of Sri Lanka’s image and interest in the USA.

After obtaining a Bachelor of Economics (Honours) degree from La Trobe University, Melbourne, Ambassador Samarasinghe served in the Sri Lanka Overseas Serviceas the First Secretary in the High Commission of Sri Lanka in Canberra, Australia, and later as Counsellor to the Permanent Mission of Sri Lanka to the United Nations in Geneva, Switzerland.

Ambassador Samarasinghe also held important offices in the national legislature including those of Chief Opposition Whip and Chief Government Whip. In addition to chairing theSub-Committee on Fundamental Rights, Language and Citizenship Rightsof the Steering Committee, Constitutional Assembly, which formulated constitutional reform proposals in 2016 and functioning as the Chair of the Parliamentary Select Committee to Investigate the functioning of the Human Rights Commission of Sri Lanka from 2002 – 2004, he has served on and led several parliamentary committees dealing with a wide range of subjects.

On the international plane, Mahinda Samarasinghe has represented Sri Lanka at various international forums, institutions and organizations, including the Inter-Parliamentary Union serving as the President of the Committee on the Human Rights of Parliamentarians, the International Labour Organization (ILO), the World Health Organization (WHO), the International Telecommunication Union (ITU) and the World Meteorological Organisation (WMO). Most significantly, he led Sri Lanka’s delegation to the United Nations Human Rights Council in Geneva – to Special and Regular Sessions of the multilateral body (2006 to 2014) including to the successful adoption of the Universal Periodic Reviews of Sri Lanka in 2008 and 2012 before the Council.