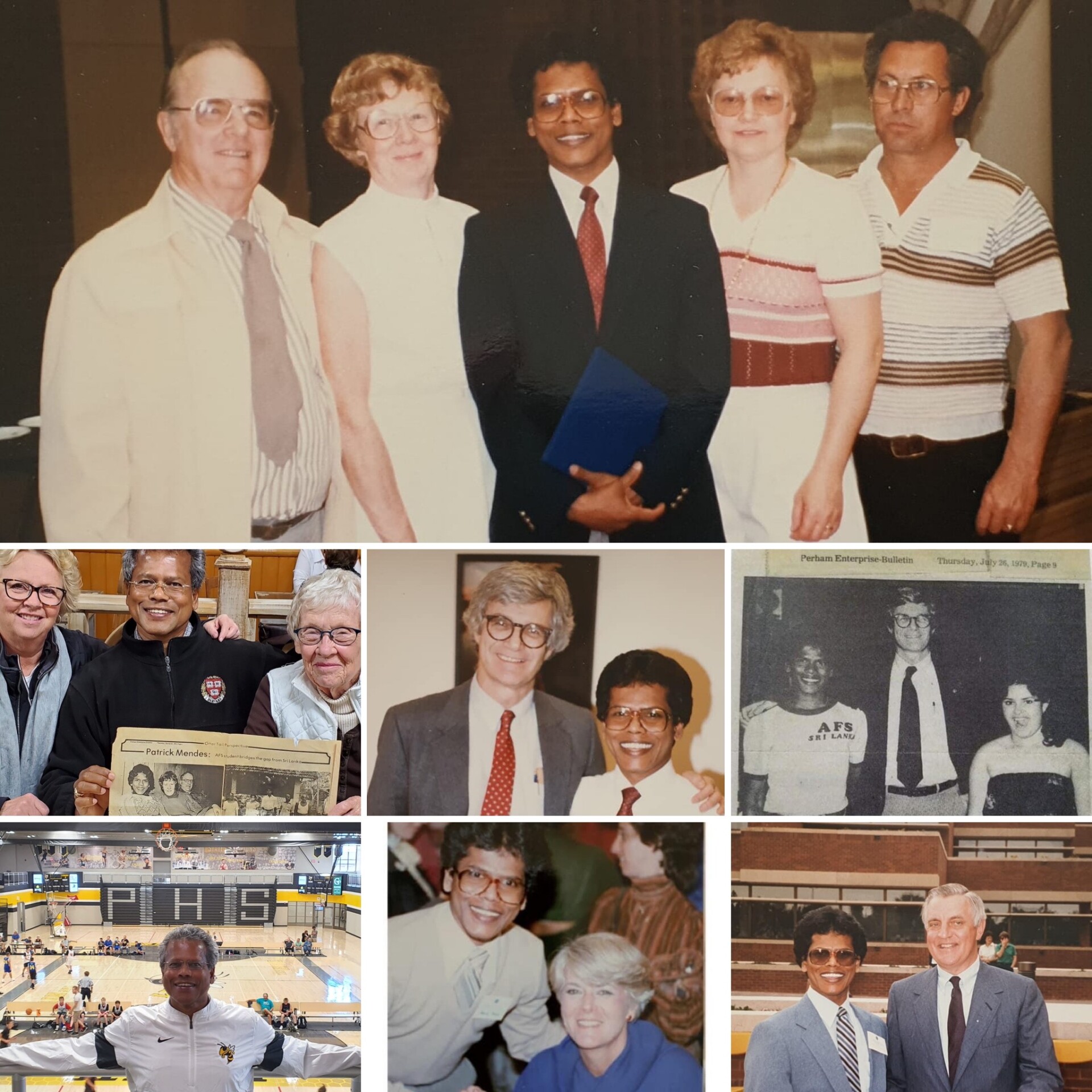 It all started with two Americans studying in Sri Lanka. One was a Peace Corps volunteer from New Hampshire, one was a 4-H exchange student from Iowa. They stayed with Dr. Patrick Mendis, a child at the time, and his grandparents in their home in Polonnaruwa, Sri Lanka. “These two exuberant and free-spirited young souls from Iowa and New Hampshire touched my heart after we rode on water-buffaloes in our three-acre rice field,” recalled Mendis.

He was raised by devout Catholic grandparents who cared for water-buffalo, pigs, chickens, a goat and a dog named Sheba. Though his home life was Christian based, he attended a Buddhist school and visited the Buddhist temple every full moon day. “During my formative years, I had the best of both Catholic and Buddhist worlds,” Mendis explained.

Inspired by the free-spirited, traveling Americans he had met as a child — and perhaps led by a bit of his own free spirit — Mendis first came to the United States at the age of 17. Encouraged by his high school teacher in Sri Lanka, he was one of 100,000 students to apply for the American Field Service (AFS) Exchange Scholarship. “I knew I didn’t have a chance because I didn’t speak English,” said Mendis, “but the national exam and the interviews were held in Sinhalese, my native language. I was lucky that I was selected as one of ten finalists among over 100,000 applicants to go to the United States.”

He traveled nearly 8,700 miles, all the way to Perham. He attended Perham High School (PHS) and formed a deep connection with his hosts, Bill and Dorothy Johnson, who he affectionately calls his American parents. He also developed close relationships with many families and individuals in the community. So evolved his “AFS family,” consisting of people such as Bill and Dorothy, the Andersons, the Hammers, the Haverlands, the Huebsches, the Knudsens, the Nelsons, the Simonsons, the Thomases and many other families.

After his graduation from PHS, he returned to Sri Lanka. While he was attending college there, a civil war broke out in the country. Concerned for his safety, his “AFS family” began raising funds to get Mendis back to Minnesota. “They asked me to return ‘home’ to Perham, which I consider my ‘birthplace’ in America,” shared Mendis.

He came back, and continued his studies at M State in Fergus Falls, later going on to attend the University of Minnesota, earning his Ph.D. His success continued to grow, and he began a long and illustrious career. He served under the former chief clerk and parliamentarian in the Minnesota House, Edward Burdick, whom Mendis considered his “guardian angel” and dear friend.

He also served under Ambassador Harlan Cleveland, the founding dean of the Hubert Humphrey School of Public Affairs at the University of Minnesota, who he also considered a friend and mentor.

Beyond that, Mendis has served on the U.S. Senate Foreign Relations Committee staff of former Sen. Rudy Boschwitz (R-Minn.) and with several other federal agencies during the Reagan, Clinton, Bush, Obama and Trump administrations.

Looking back, Mendis can trace his career all the way to his high school years in Otter Tail County. “All these great people have essentially imparted me the ‘Minnesota nice’ spirit and the sense of community that we are connected to each other,” he said, recalling the people who welcomed him to Perham and the wonderful mentors he has had throughout his life.

In an effort to share his success with his community that has meant so much to him, Mendis has established the Johnson-Mendis Scholarship through the Fergus Area Scholarship Foundation (FACF). The scholarship will be awarded annually to students choosing to attend M State in Fergus Falls. In honor of his high school experience at PHS, students from PHS will be prioritized followed by high school students from Fergus Falls High School.

“Throughout my life I have been a sojourner in the wilderness of strangers. Perhamites have always put great emphasis on education. I was one of those beneficiaries of their conviction on public education, which made my American journey possible,” shared Mendis. “… Nothing was possible without PHS and M State; they are roots which I can’t forget. In memory of my late AFS family, I established this Johnson-Mendis Scholarship for PHS students who wish to continue their studies at M State … There is nothing greater in America than helping one student at a time. It was the yeoman service that the Perhamites once did for me. I am just trying to keep up with that legacy and my Sri Lankan upbringing.”

Executive director of FACF, Lori Larson extended her thanks to Dr. Mendis. “I have had chills many times when I hear the stories of students who really need the financial support a scholarship provides,” she stated in a press release. “It is because of our donors’ generosity that these students are able to be here. Your support is truly appreciated!”

The scholarship will make more amazing adventures, like Mendis’, accessible to future college students throughout the county. “We can be adventurous souls whether we were manifested as a Peace Corps volunteer from New Hampshire, a 4-H exchange student from Iowa or an AFS scholar in Minnesota in America’s global journey,” said Mendis. Students can now apply for the 2022-23 academic year scholarship at facfmstate.org. Copy article link: Adventurous soul | News | fergusfallsjournal.com