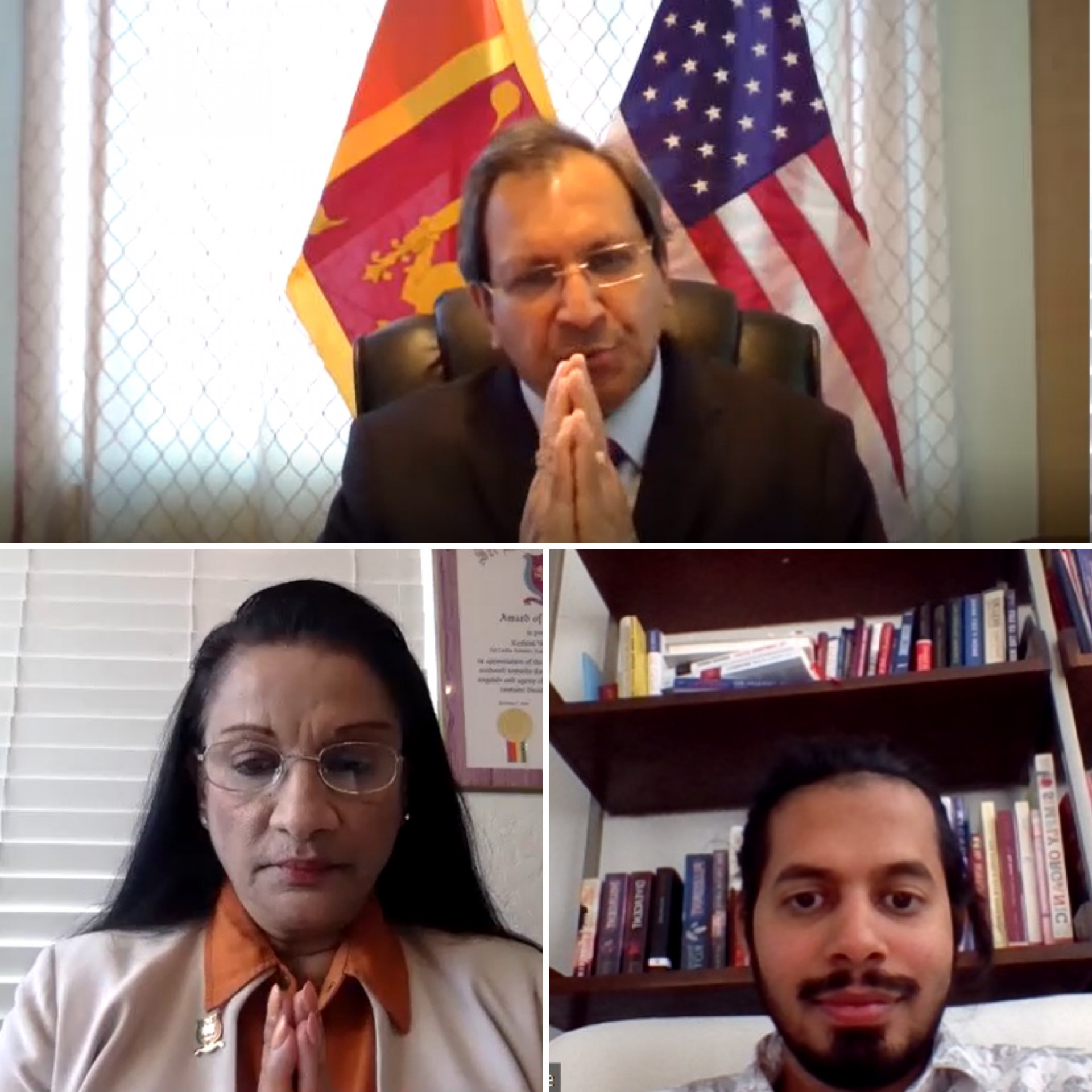 Ravinatha Pandukabhaya Aryasinha assumed duties on 1 December 2020. His Letter of Credence as Ambassador of Sri Lanka to the United States of America was formally accepted by President Donald J. Trump on 23 December 2020.

Having joined the Sri Lanka Foreign Service (SLFS) in 1988, Ambassador Aryasinha is presently the senior most officer in the Service. Prior to his current appointment, he was the Foreign Secretary of Sri Lanka, serving from October 2018 to August 2020, under 3 political administrations.

As Foreign Secretary, Ambassador Aryasinha led the Sri Lanka delegation to the 74th UN General Assembly in September 2019, the first time a Sri Lankan Foreign Secretary has addressed the UNGA during the High-Level segment. He also led Sri Lanka delegations to the Sri Lanka-EU Joint Commission in Brussels in February 2019, the Commonwealth Foreign Affairs Minister’s Meeting (CFAMM) in London in July 2019, and to the 19th Council of Ministers Meeting of the Indian Ocean Rim Association (IORA) in Abu Dhabi in November 2019.

From April – October 2018 he served as the Additional Secretary/ Economic Affairs and Trade in the Ministry of Foreign Affairs, where he operationalized a comprehensive Economic Diplomacy Programme(EDP) supported by an independent budget, enabling the Foreign Ministry and Missions to serve as catalysts in economic development, in close collaboration with Government Agencies, Business Chambers and the Private Sector.

From July 2012 – March 2018, he was Sri Lanka’s Permanent Representative to the United Nations in Geneva and Consul General of Sri Lanka to Switzerland. During this period he led Sri Lanka delegations to most sessions of the Human Rights Council (HRC), as well as launched several bilateral and multilateral initiatives related to UN agencies in Geneva. These included, conceptualizing the ‘Sri Lanka-World Intellectual Property Organization (WIPO) Cooperation Action Plan’, enabling collaborative research between Sri Lankan scientists and the European Organization for Nuclear Research (CERN), evolving a self-funding mechanism as the Chair of the Permanent Representatives of the Colombo Process on Migration, and as Chair of the United Nations Convention on Certain Conventional Weapons (CCW) initiating a process that enabled the enhancement of the mandate on Lethal Autonomous Weapons (LAWS). As President of the Conference on Disarmament (CD) from January- February 2018, Ambassador Aryasinha secured a consensus among member states on Decision CD/2119 to establish five subsidiary bodies to discuss all items on the CD agenda, which brought the CD back to substantive work after a lapse of 22 years.

While in Geneva, Ambassador Aryasinha was also concurrently accredited as Sri Lanka’s Ambassador to the Holy See and oversaw the State Visit of His Holiness Pope Francis to Sri Lanka in January 2015, while establishing close relations between Sri Lanka and several key Pontifical Councils in the Vatican.

From April 2008- June 2012, he was Sri Lanka’s Ambassador to Belgium, Luxembourg and to the European Union. During the last phase of the LTTE terrorist conflict in Sri Lanka and the quest to take action against LTTE front organizations, he enabled cooperation between Sri Lanka and the Europol, as well as Eurojust,.

Other positions Ambassador Aryasinha held in Colombo and abroad include – Second Secretary in the Sri Lanka High Commission in New Delhi, India (1989-91), on leave from the SLFS as National Information Officer in the Office of the United Nations Resident Coordinator in Sri Lanka (1993-1995), and Director/Publicity & Foreign Ministry Spokesman (1995-2000). He served in the Sri Lanka Embassy in the USA (2002-2006), where during the latter period he was the Deputy Chief of Mission with Ambassador Rank. From 2007-2008, he was the Director General in the Public Communications Division and Foreign Ministry Spokesman.

Ambassador Aryasinha has served as a Visiting Lecturer in International Relations, South Asian Politics, Diaspora Politics, Counter-Terrorism and Public Diplomacy at several academic/professional institutions including the University of Colombo and the Sir. John Kotelawala Defense University (KDU) in Sri Lanka. He has co-authored ‘Spoilers or Catalysts: The role of Diaspora in Peace Processes’ with Yossi Shain of Georgetown University, in Edward Newman & Oliver Richmond (Ed) Challenges to Peace Building: Managing Spoilers during conflict resolution (U.N. University Press, 2006), while contributing to academic journals including the UK King’s College Journal of Conflict, Security and Development.

He started his professional life in 1981 as a journalist at the Ceylon Daily News – the then leading Sri Lankan newspaper, and was a pioneer in the setting up of Rupavahini – the National Television Network of Sri Lanka, where he was a Senior Political Correspondent from 1982-1988.

A recipient of an ‘American Field Service (AFS) Scholarship’ as a student, he spent the academic year 1978-1979 attending Bennett High School in Buffalo, New York, and earned a US High School Diploma and won colours in athletics. In 1985, he received the ‘Ten Outstanding Young Persons of Sri Lanka’ Award by the Jaycees Junior Chamber International for his contribution to the field of Media.

Ambassador Aryasinha is married and has three children. His other interests include Reading, Music and Tennis.

Click on the link below to watch the video: