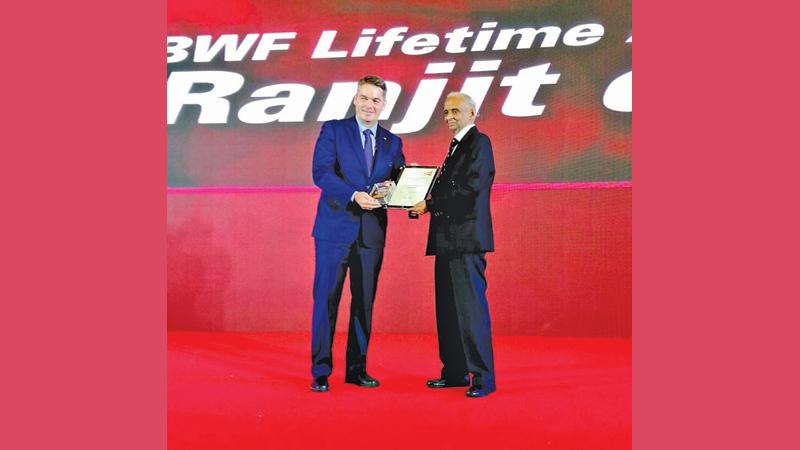 He became the first person in South Asia to receive the highly prestigious and rare award given for a lifetime of exceptional contributions and achievements in international badminton. He served in the BWF Council for 10 years after being elected by the 180 member countries. Altogether his involvement with BWF spanned 50 years from 1967 to 2017.

Between 1962 and 1976 Professor de Silva won nine Sri Lanka national badminton titles in men’s singles, men’s doubles and mixed doubles. He was captain of the Sri Lanka badminton team and Ranked No.1 in men’s singles. During this period he also obtained a First Class Engineering Degree from the University of Ceylon, a Commonwealth Scholarship to Cambridge University, UK for his PhD and became Founder Professor to set up 3 engineering degree courses in mining & mineral processing, metallurgy and ceramics and chemical engineering and fuel science at the University of Sri Lanka. While at Cambridge University he captained the badminton team in 1968-69 to defeat Oxford University by the record margin of 15–0.

In later years he was Head of Engineering at Zambia Consolidated Copper Mines and Senior Research Fellow at the National University of Singapore.

Professor de Silva served 10 years as a Council Member of the Badminton World Federation elected by its 180 member countries and was Zonal President of the Africa Badminton Federation in charge of 8 countries (including South Africa). He was President of the Zambia Badminton Association and of the Sri Lanka Badminton Association during which he was on the National Olympic Committees of Zambia and Sri Lanka. At the World Masters Games Professor de Silva has won badminton singles gold medals in the Over-50 Years and Over-60 Years categories.

An old boy of St Joseph’s College, Colombo he is President of the Institute of Materials Engineers in Sri Lanka and a member of the international sports science commission on badminton.