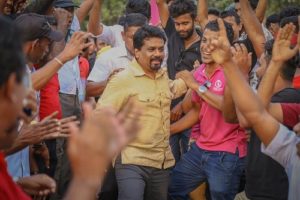 People from all over the country had arrived at the Galle Face Green to attend the mammoth rally organized by the National People’s Power (NPP) with the JVP and several other political parties and civil society organizations.

JVP Leader Anura Kumara Dissanayake addressing the gathering after he was announced as the Presidential candidate of the NPP said the security of the public can be guaranteed not by establishing police checkpoints but by building national unity and pledged to take all necessary measures to build national unity.

No racist or extremist can guarantee the safety of the public. They can increase checkpoints in front of schools. They can increase checkpoints that divide the villages. But we believe that the safety of the public can be ensured only by creating a national unity that recognizes the identities of the people, cultures and the dignity of their languages.”

“We assure to establish a ‘great human society’ spiritually attached to the hearts of the people in the motherland completely discarding the divisions based on nationality, sexuality and caste.”

He pointed out that protecting individual freedom as well as the right to a free opinion alone can bring about discipline in a society and thereby establish law and order.

Dissanayake pledged to direct the country to a new economic strategy that will spur national production instead of a 71 year destructive economic program.

I assure you that the confidence placed in me by the national people’s power and the general public will not be harmed and this struggle will definitely end with victory,” the JVP leader said.

JVP leader Anura Kumara Dissanayake requested the Sri Lankan people to “abandon the outdated, destructive path of failure and join the path of prosperity which will bring happiness, and freedom to the people.” Source – Colombo Page