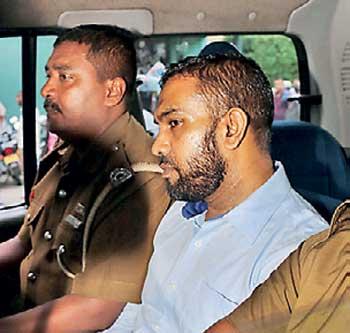 Obstetrician and Gynaecologist Dr. Shafi Shiabdeen of the Kurunegala Teaching Hospital, who was being detained by the CID, was ordered to be remanded until July 25 by Kurunegala Chief Magistrate Sampath Hewawasam, revoking the earlier detention order imposed on him, when he appeared in court yesterday (11).

The Magistrate made this order when the case against Dr. Shafi Shiabdeen was taken up for hearing for the second day.

This followed submissions by Deputy Solicitor General Thusitha Mudalige who represented the Attorney General and appeared in court for the first time and the attorneys who represented the women who accused the doctor of sterilising them against their wishes. The case went on till late and it was past 6.00 p.m when the Magistrate made this order.

The Magistrate addressing DSG Thusitha Mudalige, who represented the Attorney General, said that it would have been better if he was present in courts on the first day of hearing itself. DSG Thusitha Mudalige making his submissions stated to courts that they did not have sufficient evidence to prove the allegations made against Dr. Shafi Shiabdeen that he has obtained money from a terrorist organization to propagate Muslim extremism.

The CID submitted to courts that although Dr. Shafi had been arrested under the Prevention of Terrorism Act (PTA), the investigations conducted so far did not support this. Furthermore, with regard to allegations made against him over charges of sterilization of women against their wishes, the CID once again requested permission from court to subject 143 mothers for SHG tests.

The Attorneys representing the aggrieved mothers contended that in the investigations relating to the assets of the suspect conducted by the CID, they had not presented to courts the actual value of the properties owned by him. They argued that while the CID had dropped the charges brought against the suspect under the Prevention of Terrorism Act, no investigations had been conducted on the remittance of funds from a foreign country to a bank in Sri Lanka amounting to Rs. 115 million that lies in the name of Dr. Shafi. Therefore they demanded to know on what basis the CID had submitted to courts that he was not connected to terrorism.

The attorneys appearing for the aggrieved mothers submitted to courts that the CID is now acting against the police officials in Kurunegala who arrested the suspect, alleging that they were being victimised as a result of carrying out their duties. The defence attorneys informed court that all the allegations made against their client were false. They urged the court to have the complainants undergo the SHG test in order to establish the validity of their statements. They requested court to grant bail to their client under conditions contained in clause 14 of the Penal Code.

In view of the seriousness of the allegations made against Dr. Shafi, the Magistrate ordered that he be remanded until the 25th of this month. The Chief Magistrate also ordered that the 3-member Medical Board appointed on the recommendation of the CID to examine the women who had complained of being sterilised without their consent to be dissolved and ordered the Dean of the Faculty of Medicine of the Colombo University to appoint a medical board consisting of five specialist doctors to examine these women.

The Magistrate stated further that considering the interest this case has generated and with a view of preventing a public outcry that may affect the witnesses in the case, it would not be possible to grant bail to the suspect doctor.

The Magistrate also directed that the report prepared by the Kurunegala police in connection with the arrest of the doctor be submitted to court at the next date of hearing.

MP Athureliye Rathana Thera, leading a large number of aggrieved mothers, was among a large crowd of people present in court to witness the hearing. The crowd outside the court complex included groups supporting the aggrieved mothers, representatives of civil organizations and supporters of Dr. Shafi. This necessitated extra security to be brought in to protect the area surrounding the Kurunegala court and the Kurunegala town.